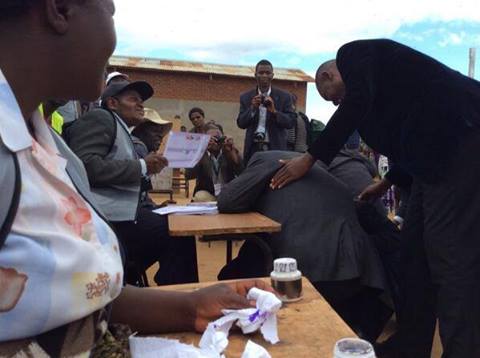 Voting came to a standstill at Goliati in Thyolo as the Democratic Progressive Party (DPP) Presidential candidate Arthur Peter Mutharika was about to cast his vote on Tuesday morning. Goliati is the same  area where several people were arrested by Malawi Police in connection with the violence that claimed two lives on March 16 2014 when President Joyce Hilda Banda addressed a PP rally in the DPP stronghold. During the fracas, Police superintendent Cassim Julius and a civilian Aaron Sawerengera lost their precious Malawian lives as political tensions heightened in the run up to the May 2014 election.

According to reports coming in from the Malawi News Agency (MANA), Peter Mutharika was interrupted by a swarm of evil bees that interrupted his voting process in the volatile area of Thyolo district which borders Mulanje.  Superstitious bystanders and social media commentators seemed to interpret this as a bad omen for the DPP Presidential hopeful whose party was blamed by the ruling party for the riot. Mutharika is on record for having called on the police to thoroughly investigate the matter and find out who caused the violence which Banda blamed on him. He denied the accusation and asked the President to publicly withdraw the claim.

Previous articleVOTING TO EXCEED 6PM IN BT-AS THE DEMONSTRATORS TARGET PTC IN NDIRANDE
Next articleChiwembe polling station in Blantyre on fire.