Veteran Politician and former Malawi Congress Party (MCP) President John Tembo has added his voice on the calls by some people especially from the Northern Region that the country should adopt Federal System of government, saying these calls are Childish.

Tembo said this in an interview with one of the privately owned radio [ZBS].

” I am not in fovour of Federal system of government”, said Tembo while adding that this idea cannot work in a small country like Malawi.

“The first President of the Republic of Malawi Dr Hastings Kamuzu Banda advocated for one nation and one Malawi and I still support this idea”, explained Tembo.

He further said the issue is advocated by few individuals who want to advanced their personal interest at the expense of many Malawians.

In his speech, President Mutharika during a Press briefing held at Kamuzu Palace a month ago said Malawi citizens will decided on whether the country should adopt Federal system or not and he said he will not allow some few individuals to mislead Malawians on this issue.

Former People’s Party (PP) Provincial Chairman for the Northern Region Christopher Mzomera Ngwira is the one advancing the proposal.

Meanwhile Malawians are following the issue with keen interest. 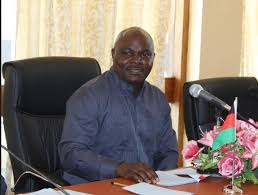