A woman claiming to be a mistress of China’s most notorious Buddhist monk posted a photo of her soiled underwear online, which she claims is proof they had sex.

As well as sharing a picture of the dirty knickers under the ‘Ms Liu Liming’ account, she claimed she has sent a condom with the sperm of Shi Yongxin – the head of China’s Shaolin Temple and known as the ‘C.E.O. monk’ – to a doctor for safekeeping. 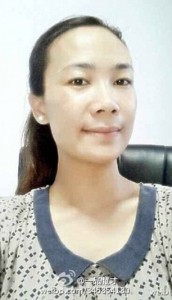 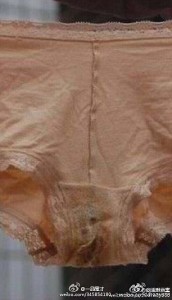 It is the latest scandalous revelation to hit the holy man, who took a solemn vow of celibacy, who has been dogged by allegations of womanizing, embezzlement and claims he has fathered illegitimate children. The allegations have sparked an investigation by Chinese authorities.

With millions of followers including celebrities Tina Turner and Orlando Bloom, Buddhism has gained popularity in the West with its focus on personal spiritual enlightenment and triumph over material gain.

And the Shaolin Temple, the birthplace of Zen Buddhism with its army of fighting monks capable of awe-inspiring athletic feats, has gained an almost mythological image in the West.

The temple has sought to protect its brand, successfully commercialising the holy centre and making it an attraction for people around the world.
In doing so Shi Yongxin has become one of the most famous monks in the world – but gossip of alleged impropriety has surrounded the abbot for years. But in recent weeks it has reached fever pitch. 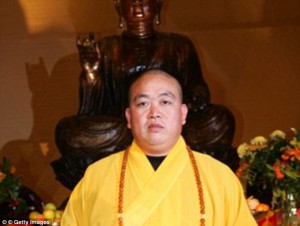 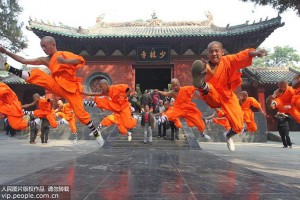 A whistleblower has stoked the fire by leaking a series of documents and photos to Chinese media about the moral figurehead – including what is claimed to be a deposition document between Liu Liming and Shi Yongxin.

At the same time a social media account under Liu Liming’s name shared a picture of the stained underwear, saying it was evidence of Shi Yongxin’s womanizing, before later taking it off Chinese social media site Weibo. But by that time it had blazed a trail across Chinese media.

The photos and documents allegedly stem from a little known 2004 case in which the monk accused her of blackmail. She apparently held onto ‘evidence’ of their relationship, which the New York Times reports included a condom filled with his semen.

The informer, who calls himself ‘Shi Zhengyi’, claims to be a disgruntled ex-monk of the Shaolin Temple, keen to expose the leader’s alleged hypocrisy of preaching moral values while behaving inappropriately.

He sent photos of some of the evidence collected at the deposition, to the state-controlled Chinese newspaper Huashang Bao, under the title ‘Latest detailed proof of Shi Yongxin’s adultery’. 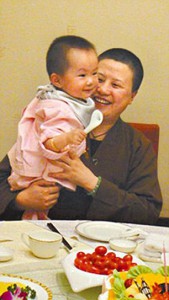 In the document, collected by Zhenzhou Police Bureau, Liu Liming said she and Shi Yongxin had sex in hotels across China up to 20 times after first meeting three years previously.

The record, translated from its original form by MailOnline, also says during that time she fell pregnant, but had a termination.

Liu Liming denied trying to blackmail the abbot by hanging onto her soiled pink panties. 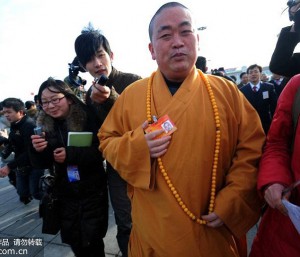 She said in the deposition: ‘The answer is I just wanted to use these things to prove the sexual relationship between me and Shi Yongxin, to prevent him denying it. I didn’t have another purpose.’

Shi Zhengyi admitted meeting Liu Liming, the papers show, after she contacted him asking if she could set up a branch of the Shaolin Monastery in the city of Shenzhen, but said their relationship was strictly professional.

The case was settled, with Shi Yongxin paying her three million Yuan (£104,000) as compensation.

The real identity of ‘Shi Zhengyi’ is not known. The People’s Daily News reported that the Defeng city government said they had no records of anyone with that name – which roughly translates as ‘justice’ – and he ‘doesn’t exist’.

He has said he wanted to to force a government investigation into Shi Yongxin, saying in a statement to the New York Times: ‘We want the outside world to know that the Shaolin abbot, using Buddhism as a cloak, is a maniacal womanizer and corrupt ‘tiger’ who brazenly exploits Shaolin’s assets and tarnishes its reputation.’

As well as claiming Shi Yongxin owns a range of swanky cars and has stolen millions from temple’s commercial arm, ‘Shi Zhengyi’ has shared pictures of a Shaolin nun and her baby who the monk is alleged to have fathered. 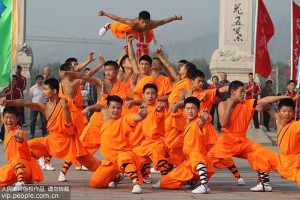 Monastery officials have denied the allegations against the monk, who has committed himself to a life of celibacy, poverty and upholding moral values.

The 50-year-old has been at the forefront of the transformation of Shaolin Temple, which dates back 1,500 years and is the birthplace of kung fu and Zen Buddhism.

Over the centuries it has been destroyed and rebuilt many times over, after being raided by bandits in the 14th century, sacked in the 17th by rebel forces and razed to the ground in the 18th by the ruling Qing dynasty. Yet time and time again it has bounced back, and these days stands as the epicentre of a commercial empire, with at least 40 affiliated sites around the world, a global reputation and millions in the bank.

But critics have complained the rapid commercialisation of Shaolin under Shi Yongxin has come at too high a price, amid accusations of ‘moral corruption’ of its monks, and overspending. 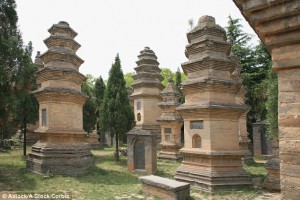 Questions were raised over the monastery reportedly spending £277,000 on toilets for tourists inside the temple, and Shi Yongxin receiving a gold-threaded robe, which craftsmen spent years making and cost a reported 50,000 Yuan (£5,200),The People’s Daily News wrote.

Ifeng.com reported that in 2006, Shi Yongxin accepted a jeep worth one million Yuan (£104,000) from the city of Dengfeng, while on a tourism conference.

He defended accepting the jeep at the time, saying: ‘We attracted a lot of tourists and students, so the local government gave me a present of a car to encourage me to work better.’

The website also reported some of the most explosive allegations in 2011, when rumours swirled on the internet that Shi Yongxin had been arrested for prostitution – prompting him to register at the local police station as a show of his innocence.

Shi Yongxin was also accused of owning villas in American and Germany, having sex with one Chinese celebrity and being a ‘sugar daddy’ to a female university student, who he has a son with and now lives in Germany.

In October of that year, a statement was published on the temple’s website dismissing the allegations and calling them ‘complete nonsense’, adding it was ‘malicious libel.’

The gossip has continued, as suggestions that $30million (£19million) in the temple’s account was put into bank accounts overseas were also published on Ifeng.com.

And in November 2011, a hacker infiltrated the temple’s website and posted an apparent ‘letter of confession’ in the name of Shi Yongxin – expressing his ‘guilt’ for commercializing the temple, and asking other ‘sinners’ of the temple not to continue pursuing this strategy.

The commercialization has continued regardless – plans were revealed this year to for the monastery to invest £180million in a new complex in New South Wales, Australia, which will include a temple, hotel, golf course and Kung fu academy,News.com.au reported.

He defended himself to the state-run Xinhua news agency in March, saying: ‘If China can import Disney resorts, why can’t other countries import the Shaolin Monastery?

As a result of the latest slew of allegations, the religious affairs bureau under the Denfeng city government says it was asked by the national body to look into the latest claims against the Chinese abbot.

‘Our bureau takes this extremely seriously and will swiftly clarify … and ensure a correct understanding of the matter,’ the bureau said in a one-sentence notice on the city government website.

Khaby Lame Is Now The Most-Followed TikToker In The World

Khaby Lame Is Now The Most-Followed TikToker In The World

Wonders shall never end, a Kenyan man shocked his...