Police are keeping in custody a Chinese national for allegedly attempting to export banned game trophies popularly known as ivory.

KIA Police Public Relations Officer Sapulain Chitonde Lee confirmed of the development in an interview with the press and identified the suspect as Mr Zhang Hongzhi.

Mr. Hongzhi was arrested on August 29 at Kamuzu International Airport (KIA) as he was trying to fry out of the country using Ethiopian Airlines Flight Number ET 877 to Beijing. 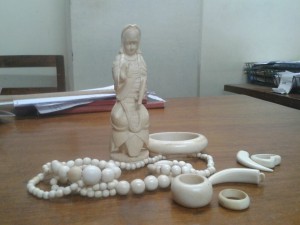 According to Chitonde, Police managed to intercept a half kilogramme of Ivory after an X-Ray exposed it.

Chitonde said the ivory was well-packed in counterfoil papers – a strong material that blocks x-ray from scanning through.

“Our officers managed to detect what was inside because they are professionals.

“The owner of the bag initially denied carrying anything strange in his bag and implored the police not to bother opening it. However, the police demanded him to open it. Only then did he, through his girlfriend, disclose that it was in fact only a small ivory. He begged the police to let him go,” he said 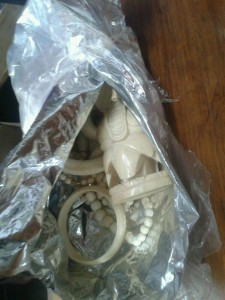 Speaking through his girlfriend (name withheld, but works in Area 9 as a nanny, a post she has held for 9 years), Mr Zhang Hongzhi disclosed that the Ivory was given to them by someone who stays in Area 2. He failed to mention his name.

The suspect will be charged with illegal exportation of specimen of protected species which is contrary to Section 98 (b) of the National Parks and Wildlife (Amendment) Act as read with Section 111 of the same Law.

The Minister of Gender Community Development and Social Welfare...

Some vendors from Mzuzu City Council (MCC) market have...

The launch of the 2022 16-days of activism against...
FaceofMalawiNEWS