PICTURED: SHOCKING MOMENT COUPLE WERE CAUGHT HAVING SEX IN PUBLIC SQUARE ON SPAIN’S ‘COASTA DEL YORKSHIRE’ BEFORE TELLING POLICE WHO TRIED TO MOVE THEM ON TO ‘GO AWAY AND DON’T BOTHER US’

This is the shocking moment that a randy couple were caught on camera brazenly having sex in a public square on Spain’s ‘Costa del Yorkshire.’

When police interrupted the amorous pair they told officers: ‘Go away and don’t bother us.’

The video shows the stark naked man – wearing just his socks and shoes – having sex with a woman on a bench in a square surrounded by restaurants and cafes in the Costa Blanca resort of Torrevieja. 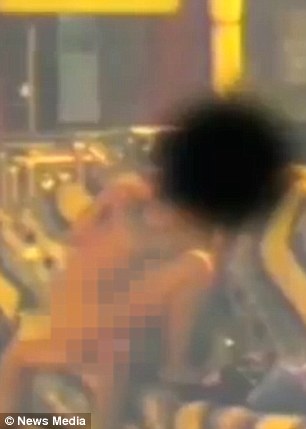 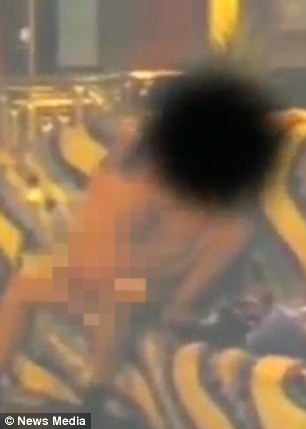 This is the moment the couple were caught on camera brazenly having sex in a public square in Torrevieja, Spain

Today the lovebirds were facing a £435 (600 Euro) fine after being reported for a public order offence.

A shocked holidaymaker filmed the romp at around 6.30am on Thursday morning after the couple ignored pleas from passers-by to take their liaison inside.

It has since gone viral,  with one Twitter comparing Torrevieja to the Majorcan resort Magaluf which is still trying to shake off the bad headlines from a sex video involving a Brit that went viral last summer, joking: ‘Torrevieja has become the new Magaluf.’

The spot the couple picked – Waldo Calero Square – is one of the town’s most popular tourist areas and lies close to the popular market and the casino.

Officers from the Civil Guard called to the scene wrote in their report that the couple – thought to be Spaniards – asked them to leave and not bother them.

Magaluf hit the headlines last year after a British teenager was filmed performing sex acts on 24 men inside a bar after a pub crawl.

Last month a British couple were filmed romping on a beach sunbed in the resort in broad daylight.

The antics of drunken Brits led to a clampdown by local authorities with new rules on pub crawls and fines for public nudity and night-time drinking on the streets.

Torrevieja, 30 miles south of Alicante, has a high British expat population and has been nicknamed the ‘Costa del Yorkshire’ by some of the holidaymakers who flock to it. 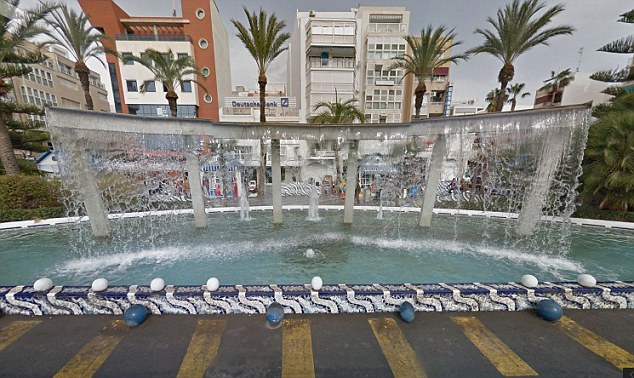 The town and surrounding area is also popular with Irish, Germans and Scandinavians.

Travel guides describe Waldo Calero Square as a very popular square close to the harbour with a magnificent water fountain and blue and white tiled seats designed in the style of famous architect Antoni Gaudi which ‘draw their inspiration form the waves of the sea.’

It is a just a two-minute walk from the town’s tourist office.

It was given its name – Plaza Waldo Calero in Spanish – in 1975 after a former military officer who was mayor of Torrevieja between February 1924 and April 1929.

He was named mayor aged 70 after his solid military career.