Pope Francis made history today as he participated in a virtual audience with Americans from across the country in preparation for his upcoming first-time visit to the United States.

But it was the moment when he asked a bullied Chicago teen to sing for him that has touched hearts across the country.

Valerie Herrera’s high school, Cristo Rey Jesuit, was one of three places the pontiff spoke to via satellite from the Vatican. 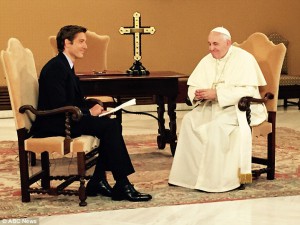 Tears rolled down the 17-year-old’s face as she told Pope Francis how she had been bullied for a rare skin condition, but turned to music as her solace.

The pope told Herrera in English that he would like to hear her sing and, when she hesitated, said ‘be courageous’.

Herrera sang By You, Mary. It was a song she had learned years ago in choir and was the first one to pop into her mind, she said.

‘I was so nervous, and we were talking and I started crying because of the nerves,’ Herrera told WLS-TV in Chicago of the moment she spoke with the pope.

But Herrera brought a smile to the pope, who thanked her after she sang the song in Spanish.

Pope Francis also spoke to congregants from the Sacred Heart Church in McAllen, Texas, as well as a group of homeless men and women, and the people who worked with them, in Los Angeles. 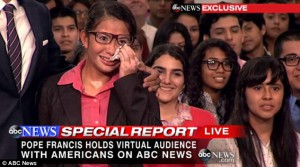 The pope allowed ABC News to host the event so that he could reach out to Americans in parts of the country that wouldn’t be able to see during his visit later this month.

‘It is very important for me to meet with you, the citizens of the United States, who have your history, your cultures, your virtues, your joys, your sadness, your problems just like everyone else,’ he said.

‘That’s why this trip is important for me to draw close to you and your path, your history. I’m praying for you all and I ask for you to pray for me.’

The event was not an interview but rather a chance for the pope to hear Americans tell their own personal stories of struggle.

Daniel E. Flores, bishop of the Brownsville Catholic Diocese in Texas, tweeted that Pope Francis spoke to immigrants and heard their stories, as well as answered questions, according to the Washington Post.

At one point, after hearing one Chicago teenager speak of the adversity she’s faced in her life, the pontiff asked the young girl in English if she would sing for him. 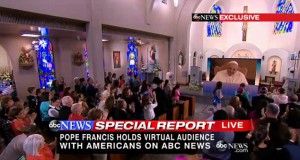 Pope Francis will be in the United States from September 22 through 27, for a trip where he is expected to discuss immigration, poverty and homelessness.

The pontiff will meet with President Obama at the White House as well as address a joint-meeting of Congress in Washington, D.C.

He will also address the UN General Assembly in New York, visit an East Harlem school and hold a multi-religious service at the September 11 Memorial and Museum, according to ABC News.

The pope will conclude his trip in Philadelphia, where he will visit a prison and then attend the World Meeting of Families, a global event organized by the Catholic Church where two million people are expected to attend his closing mass.

Pope Francis will be only the fourth reigning pontiff to have ever visited the US. Pope Benedict XVI was the last to visit the country, back in 2008.

The event with Pope Francis will air on 20/20 this Friday and will be posted on the network’s website in both English and Spanish.