A 26-year-old who was once labeled the ‘ugliest woman in the world’ insists that she is actually thankful for the online bullies who cruelly tormented her about her appearance, because they helped her get to the great place she’s in today.

Lizzie Velasquez was born with neonatal progeroid syndrome, a rare genetic disorder that gives her an aged appearance. It affects her face, muscle tone, brain, heart, eyes, and bones, and also prevents her from gaining weight – meaning that at 5’2″, the Austin, Texas, resident is just 63lbs.

As if all of those struggles weren’t enough for Lizzie to face, she also became the victim of cruel YouTube commenters who branded her the ‘ugliest woman in the world’ when she was just 17. But instead of letting that moment define her, Lizzie has become an activist against online bullies, recently tellingToday about a new documentary spotlighting her efforts. 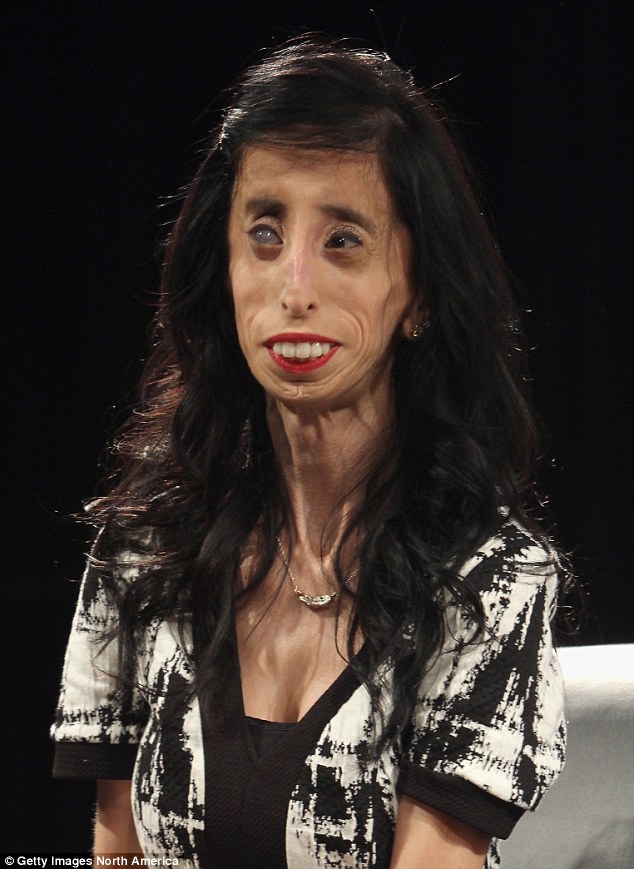 Born this way: Lizzie Velasquez, 26, was born with neonatal progeroid syndrome, which gives her an aged appearance that prompted cruel YouTubers to label her the ‘world’s ugliest woman’ 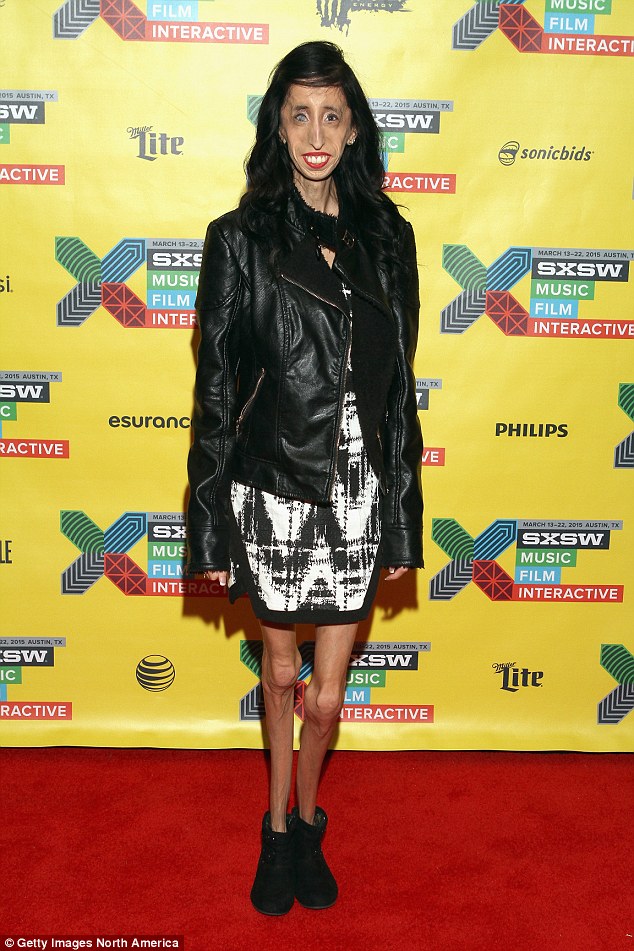 Cruel commenters: Lizzie found the YouTube video when she was 17 and was shocked that all of the comments were negative and no one tried to defend her

Lizzie didn’t know she was different until her first day of kindergarten, when her classmates shrunk away from her. The other kids seemed afraid of her appearance and would often point and refuse to sit with her – even though she wasn’t doing anything wrong.

‘It was a big slap of reality for a five-year-old,’ she said.

Her parents told her that she was just smaller than the other kids, but she was beautiful and could accomplish anything.

With a loving family to back her up, things started to improve a bit as she got older. She made an effort to remain positive, and even joined after-school activities to make friends. She was on the school paper and the cheerleading team, and as she put herself out there, her life got better.

Until one day, when everything changed. Lizzie was still in high school, looking for music on YouTube when she stumbled across a video of herself. In the comments section, anonymous strangers said terrible things, labeling her the ‘ugliest woman in the world’ and slinging hurtful insults. They called her a monster, said someone should ‘kill it’ – meaning her – ‘with fire’, and asked why her parents didn’t abort her.

Lizzie Velasquez speaks at TEDx Austin on defining herself 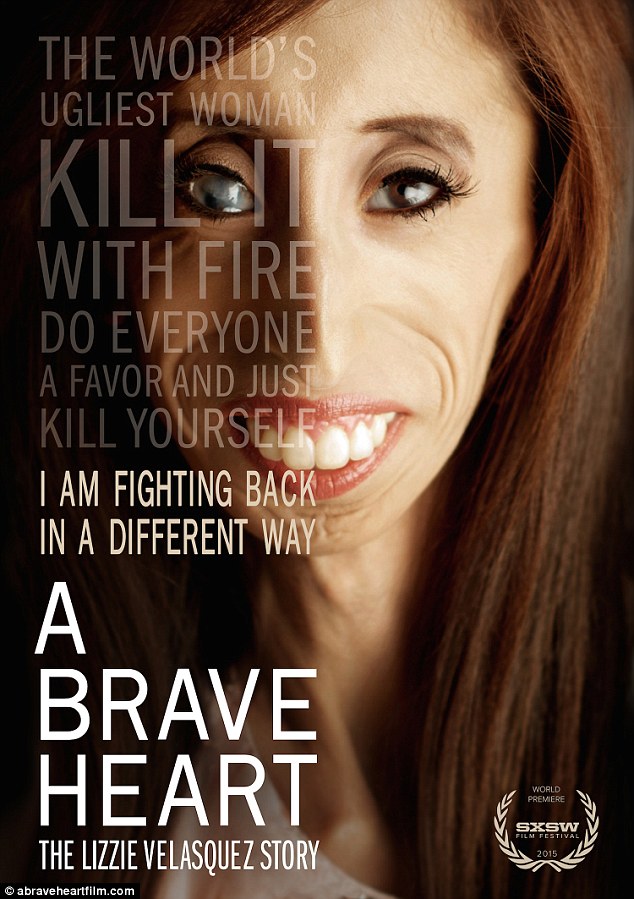 Standing strong: Since the ordeal, she has become a motivational speaker and stars in a new documentary, A Brave Heart, which comes out this September 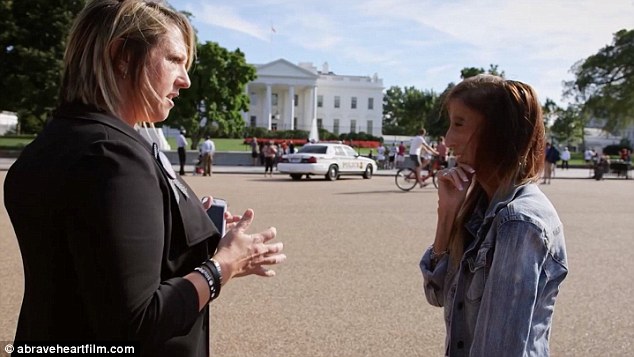 Brave lady: In the film, she talks about her struggles and her growing career fighting bullies

And though she knew that the kinds of people who would write such awful things are the lowest of the low, that didn’t stop their comments from hurting Lizzie – especially because each and every one of them was negative.

‘I read every single comment thinking there would be one person to stand up for me. Not one person said, “She’s a child, leave her alone,” or “You don’t know her story, why she looks like that,”‘ Lizzie recalled. ‘I felt like someone was putting a fist through the computer screen and physically punching me. I bawled my eyes out.’

Not one person said, ‘She’s a child, leave her alone,’ or ‘You don’t know her story, why she looks like that’

But while most people would have trouble recovering from such a heart-wrenching experience, Lizzie is not most people. In fact, she now says that she would like to thank the person who first labeled her the ‘ugliest woman in the world, because he or she changed Lizzie’s life.

Perhaps because she had already overcome so much adversity, the young woman was able to turn that cruelness into something good. Since then, she went on to college, wrote a book, and became a motivational speaker and anti-bullying activist – which was most famously seen in her widely-watched 2013 TED talk in Austin that has been watched over eight million times to date.

Those encouraging words clearly struck a chord with many people. Lizzie explained to Today: ‘I’m not sure what it was about the TED talk and what I said in it, but it changed everything.’

Lizzie Velasquez, 26, explains how you can see her movie 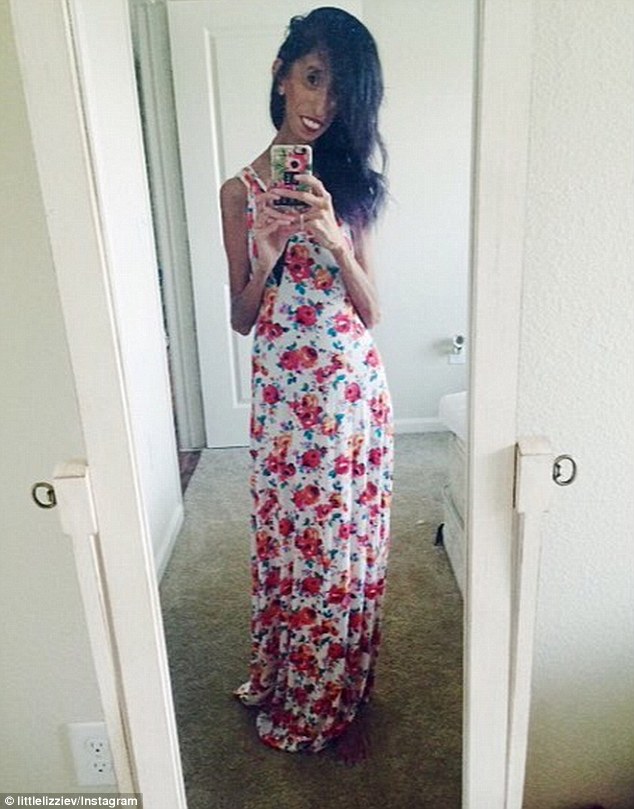 New career: After her wildly successful TED talk, which has been viewed over eight million times, she has become somewhat of a celebrity 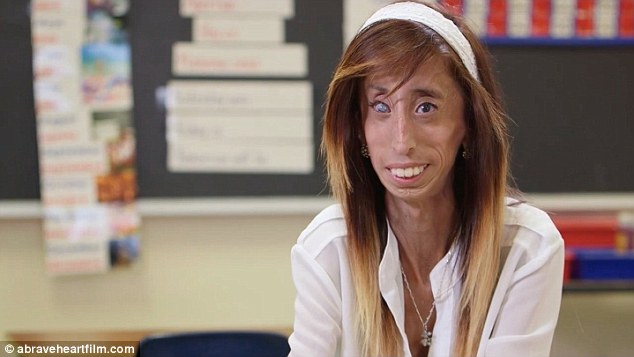 No dwelling: She says that some days she just listens to Adele and cries, but always picks herself back up the next day and moves on

After the event, Sarah Hirsh Bordo, who produced it, contacted Lizzie about making a documentary, which came to be called A Brave Heart and will premiere on September 25.

‘When you see the film, it is my story, but it’s also everyone’s story. People can relate to being bullied or feeling insecure or being embarrassed by their looks,’ Lizzie explained. ‘Unfortunately bullying will never end – ever. It’s a big reminder that there is work to do to ensure others do not feel alone. We have to show them there is light at the end of the tunnel.’

Lizzie warns people not to be fooled by the way someone seems on the outside, since you never know what another person is dealing with. She explained that while it may seem likes she has ‘an incredible life’ now, she still has bad days – especially because she has a week immune system. But allowing herself to feel the weight of those bad days also helps her stay positive.

‘I always tell people [that] I allow myself sad days to be alone and close the blinds and listen to sad music like Adele and cry, eat junk food and have a pity party,’ she said. ‘I let it out of my system for one day, but the sun comes out the next day I have the power to go on.’

And for Lizzie, going on doesn’t mean just pulling herself up. It also means pulling others up with her.

Police in Kasungu are keeping in custody Cosam Phiri...
FaceofMalawiNEWS