Saartjie “Sarah” Baartman (before 1790 – 29 December 1815) (also spelled Bartman, Bartmann, Baartmen) was the most famous of at least two Khoikhoi women who, due to their large buttocks (steatopygia), were exhibited as freak show attractions in 19th-century Europe under the name Hottentot Venus—”Hottentot” was the then current name for the Khoi people, and is now considered an offensive term. and “Venus” in reference to the Roman goddess of love.

Life
According to popular history, Saartjie Baartman (more commonly known as Sarah or Sara Baartman) was born in 1789 in the Gamtoos Valley of South Africa. When she was barely in her 20s, she was sold to London[who?] by an enterprising Scottish doctor named Alexander Dunlop, accompanied by a showman named Hendrik Cesars. She spent four years in Britain being exhibited for her large buttocks (steatopygia). Her treatment caught the attention of British abolitionists, who tried to rescue her, but she claimed that she had come to London on her own accord. In 1814, after Dunlop’s death, she traveled to Paris. With two consecutive showmen, Henry Taylor and S. Reaux, she amused onlookers who frequented the Palais-Royal. She was subjected to examination by Georges Cuvier, a professor of comparative anatomy at the Museum of Natural History. In post-Napoleonic France, sideshows like the Hottentot Venus lost their appeal. Baartman lived on in poverty, and died in Paris of an undetermined inflammatory disease in December 1815. After her death, Cuvier dissected her body, then displayed her remains. For more than a century and a half, visitors to the Museum of Man in Paris could view her brain, skeleton and genitalia until she was buried.

Baartman, pictured next to a chair and a goura Baartman was sold to a Frenchman, who took her to his country.  She was in France from around September 1814. An animal trainer, S. Réaux, exhibited her under more pressured conditions for fifteen months. French naturalists, among them Georges Cuvier, head keeper of the menagerie at the Muséum national d’Histoire naturelle, visited her. She was the subject of several scientific paintings at the Jardin du Roi, where she was examined in March 1815: as Saint-Hilaire and Frédéric Cuvier, a younger brother of Georges, reported, “she was obliging enough to undress and to allow herself to be painted in the nude.” This was not literally true: although by his standards she appeared to be naked, in accordance with her own cultural norms of modestythroughout these sessions she wore a small apron-like garment which concealed her genitalia. She steadfastly refused to remove this even when offered money by one of the attending scientists. It has been alleged that once her novelty had worn thin with Parisians, she began to drink heavily and support herself with prostitution. Baartman however had refused payment to allow scientists to observe her genitals in spring 1815, suggesting she both retained her Khoi standards of modesty and was not destitute at that time: and as a French paper carried the usual advertisements for her show only a week prior to her death, she may always have been able to support herself without recourse to prostitution. 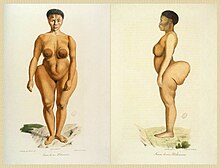 Since her rise to prominence Baartman’s body has been used to set a borderline between the “abnormal” African woman and “normal” Caucasian woman. The fact that she had protruding buttocks and an extended labia minora made society view her as this “wild or savage female”. Her “abnormalities”, as Georges Cuvier mentions in the “Gender, Race and Nation” chapter of The Gender and Science Reader, made her resemble everything but a white woman. She had a peculiar jaw structure, a short chin, and a flat nose, which resembled that of a “Negro”. She was then considered to be part of the “Negro race,” which at the time was considered the lowest race of humans. She was sometimes likened to an orangutan instead. 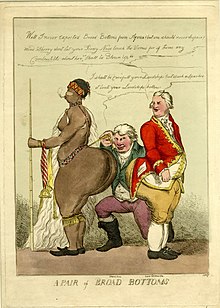 In cartoons and drawings Baartman’s features were often exaggerated to highlight her difference from the perceived “normal” Caucasian female. This social construction of visual imagery likely amplified and reinforced racist perspectives. Little of this knowledge can be considered completely factual as most knowledge of Baartman is not extrapolated from diverse sources of documentation.

Since Baartman was subject to perform not in the regular European-style clothes she would have worn in Cape Town, but in costume. Crais says: “People came to see her because they saw her not as a person but as a pure example of this one part of the natural world”.[8]In Paris, Baartman’s promoters didn’t need to concern themselves with slavery charges. Crais stated: “By the time she got to Paris, her existence was really quite miserable and extraordinarily poor. Sara was literally treated like an animal. There is some evidence to suggest that at one point a collar was placed around her neck.” Upon death, Baartman’s body was sent to George Cuvier’s laboratory at the Museum of Natural History for examination. Cuvier wanted to examine her genitals to test his theory that, the more “primitive” the mammal, the more pronounced would be the sexual organs and sexual drive. Baartman refused to be an experiment while she was alive. With permission from police, Cuvier, who had amassed the world’s largest collection of human and animal specimens, conducted an autopsy on Baartman’s dead body. First he made a cast of her body, then he preserved her brain and genitals. Cuvier concluded that “the Hottentots” were closer to great apes than humans. The rest of Baartman’s flesh was boiled down to bones for Cuvier’s collection and displayed for years afterward. Baartman’s body did not receive a proper burial until much later.

After her death, Sarah Baartman’s body underwent dissection and ‘analysis’ of her brain, organs, genitalia and buttocks. Blaineville and Cuvier had asked Baartman to allow them to study her nude while she had been alive and she had refused them this request.

During 1814–1870, there were at least seven scientific descriptions of the bodies of women of color done in comparative anatomy. Cuvier’s dissection of Baartman helped shape European science. Baartman, along with several other African women who were dissected, were referred to as Hottentots, or sometimes Bushwomen. The “savage woman” was seen as very distinct from the “civilised female” of Europe, thus nineteenth century scientists were fascinated by “the Hottentot Venus”.[12] In the 1800s, people in London were able to pay two shillings apiece to gaze upon her body in wonder. Baartman was considered a freak of nature. For extra pay, one could even poke her with a stick or finger.

Della Perry and Ruth Whiteside are feminist theorists who have discussed how the label ‘disability’ and the term ‘biological determinism’ have affected the exploitation, discrimination and abuse of women and people of African descent. They comment on how differences in biology have dictated a social hierarchy and stratification. Sara Baartman’s organs, genitalia and buttocks were thought to be evidence of her sexual primitivism and intellectual equality with that of an orangutan.

When you pray for France do not forget to pray
for that South African lady Sarah Baartman
whose body was in French zoos being used as
an exhibition. During her living days she was
sexually abused and would be forced to walk
naked in the streets of Paris and every white
mafias would just touch her Body or have sex
with her . She would be used in lectures as
exhibition of how the Body of a Black lady looks
like and even today the French people believe
the clitoris of a Black women has demons.
Some psychological thoughts believe that was
the beginning of lack of confidence by most
Black women.
Do not also forget to pray for the 18000 chopped
heads of Africans who were beheaded during
French colonisation of the Francophone
countries. As am writing here these thousands of
African bodies are hanged in French Mesiums as
exhibitions of French Colonial supremacy,, our black brothers / sisters r been used as modern slaves in France, please do not forget to pray for them as well

Police in Dedza have arrested a sex-worker for killing...
FaceofMalawiNEWS