Information reaching faceofMalawi indicates that Malawi Broadcasting Corporation (MBC) Director of Programmes Albert Mungomo has been fired from his position and has been replaced Mzati Nkolokosa as Acting Director.

According at a memo which has been circulated to all members of staff, the decision to fire Mungomo, a Democratic Progressive Party (DPP) sympathizer and former State House Press officer was decided during a board meeting held on November 16, 2015.

According to inside sources, Mungomo failed to satisfy the board for the approval as his tenure was marred by serious controversies.

The board has also appointed Geoffrey Kazembe the man behind Quiz Master program as Director of News and Current Affairs and Mr. Aidan Gumeni as Director of Engineering.

Apart from Kazembe, the board has also appointed Miss Takondwa Jumbe as Chairman for this year’s Innovation Award a position which was also in the hands of Mungomo.

Meanwhile the board has urged all staff at MBC to joins in supporting the newly appointees. 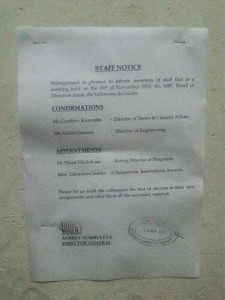 Previous articleMALAWI DEFENCE FORCE SOLDIER KILLED IN DRC
Next articlePastor, 60 marries his pregnant girlfriend, 19, with the blessing of his wife, 44, and they all live together