Minister of Information and Communications Technology Nicholas Dausi, who is also government spokesperson, was called in on Saturday to Times Exclusive interview on Times TV hosted by presenter Brian Banda in order to disclose government’s stand over the suspension of Minister of Agriculture, Irrigation and Water Development Dr. George Chaponda by the Mzuzu High Court on Zambia maize deal.

How the questions were answered by Dausi in this interview, is what still haunting in minds of Malawians while piercing them with deep cuts, that have forced some to cry in pain ‘calling Dausi an empty vessel.’

The Zambia maize gate is more like funeral song that everybody has to sing along with sad face as maize is very important to every normal Malawian, it is staple food, is the key for any development in the country, once is very expensive everything  goes high.

No wonder on January 14, 2017 every ear of Mother Malawi was rendered to hear what government though its spokesperson would say on the issue.

Banda asked Dausi on why the President seems to cover the Minister of agriculture, treat him in special way despite his big role in misprocurement of Zambia maize import, he is not fired.

“You should not have pathological hatred with Honourable Chaponda,”answered Duasi in defensive voice.

Suddenly, Dausi jumped into calling Banda a Christian and pastor, names that speak volumes in different dimensions, first people think Christians are tolerable fools who cannot speak out when politics decay, who cannot attack physically but wait on God, second Dausi used tactics to change a focus of discussion, run way from saying a truth.

The interview turned out to be a war of shouts; a senseless noise followed and in length journalist personality continued to be attacked.

Malawians were left with nothing to lean on, do not get  sizable ideas  on Maize-gate,  what they needed to hear was not heard as their ears were filled with bombastic noise of words and their questions remain answered.

The following are comments on Facebook after video below of this interview was posted. 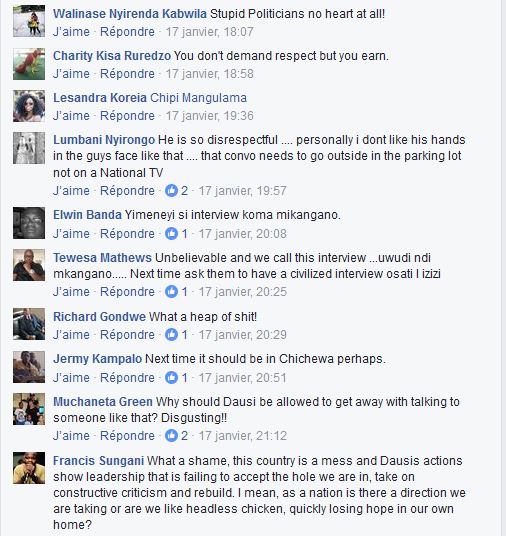 Police in Kasungu are keeping in custody Cosam Phiri...
FaceofMalawiNEWS