A man has received maximum punishment after he was found out to have beaten his own wife to death before burning up her body. 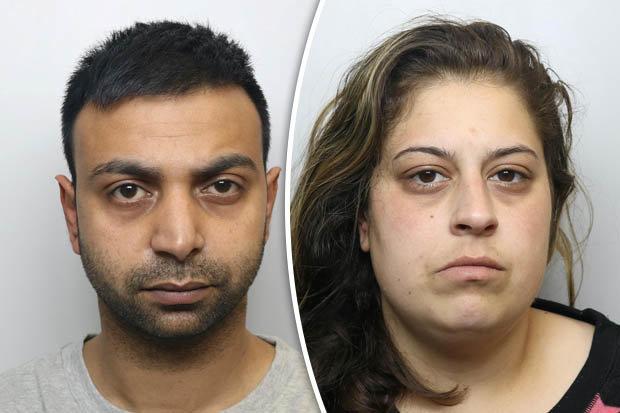 Akshar Ali, a man who shocked the world when it was learnt that he had “brutally” murdered his wife before dumping the body in woodland and dousing it with petrol was today jailed for life.

According to Daily Star UK, some gasps of “yes” could be heard from the public gallery as Akshar Ali was jailed for a minimum of 22 years for the “cold-blooded” murder of Sinead Wooding.

His close friend Yasmin Ahmed was also jailed for 22 years after being found guilty of murder.

Mum-of-four Miss Wooding, 26, was stabbed six times, including in the neck, and repeatedly struck on the head with a claw hammer in a “determined attempt” to kill.

A court heard several text messages were sent between the married couple where Ali criticised Miss Wooding for her behaviour and social circles.

The pair were about to separate and an alcohol-fuelled argument ensued on the night of the sustained attack, probably about what would happen to the children – of which Miss Wooding shared the youngest two with Ali.

Leeds Crown Court heard Ali plied Miss Wooding with alcohol at a get together at Ahmed’s home address to a point where she was unable to defend herself.

Miss Wooding’s body was kept in the cellar at pal Yasmin Ahmed’s home for two days before being transported to woodland.

The pair then orchestrated an operation to hide the killing by setting the body on fire.

It had been wrapped in a duvet and trussed up with wire before being doused with petrol.

The smouldering remains were discovered on Stairfoot Lane at about 9am on May 14 last year by students out for a run in woods near a lane in Alwoodley, West Yorks.

A jury unanimously convicted Ali, 27, and Ahmed, also 27, of murdering Miss Wooding at Ahmed’s home after nearly a week of deliberations.

The pair remained seated while they were sentenced to life imprisonment with a minimum term of 22 years.

Sentencing the pair, Mr Justice Langstaff said: “The number of blows and number of wounds indicate that it was a clear determined attempt to kill.

“It seems to me the deceased died, in my view, suffering seriously awaiting death.

“It was a sustained attack over a short period of time.”

Vicky Briggs, 25, of Middleton, was also found guilty of assisting an offender by helping clean up and burn material after the murder and handed four years behind bars.

His brother Asim Ali, 21, of Kings Road, Hyde Park, was found not guilty of assisting an offender.

Aktahr Bi and Asim Ali wept in the dock before being told they were free to go.

In a statement, Sinead’s family said: “It is so hard to put into words the impact that Sinead’s murder has had on us all.

“We are completely devastated that she has been taken away from her family and her children at such a young age and in such terrible circumstances.

“Those responsible were the people who should have been looking after and loving Sinead, especially her husband Ali.

“Instead these vile people murdered her in what must have been a horrific ordeal, and then treated her body disgustingly as they tried to cover up what they had done.

“We feel the pain of our loss every waking moment of every day and are still struggling to understand how another human being could be so cruel and take her life in such a horrible and brutal way.

“This is a pain that will never go away and the family will have to live it with for the rest of our lives.

“Ali and Ahmed did not have the decency to admit their guilt or take responsibility for their actions which meant the family has had to sit in court and listen to the horrible truth of what they did.

“No amount of time in prison is ever going to bring Sinead back and it will never be long enough. They have taken her whole life away but they will still get to see their families.

“We will never forgive them for what they have done.”

This young man and lady in this viral video...

There is drama at parliament as two chief whips...
FaceofMalawiNEWS