If you are looking for drama then look no further than on Facebook walls because you will find it all. From angry status updates, friendships that have moved from poked, friended, blocked, to unfriended, relationships that have moved from single to in a relationship, to engaged, and to married before they engaged in reverse gear and became complicated, separated and divorced–Facebook has it all. 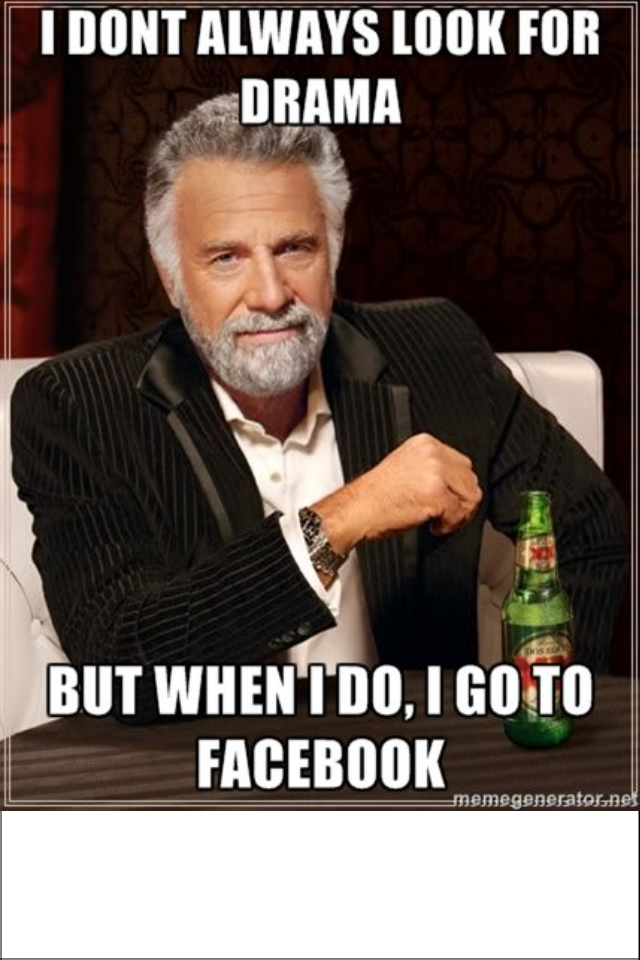 Facebook is like that–once you start telling it your issues, it has a way of attracting you to keep on revealing more. And the more you reveal things to it, the more it spreads out your issues. This, of course, is not always a bad thing-consider that woman or man who benefits from publicizing her or his goods on Facebook or consider the number of people who benefit from sports or news updates on Facebook.

However, Facebook becomes a bad thing if you make it the centre of your drama. Everyone has some drama now and then in their life but if you are the type of person who seems to be plagued by drama everyday, it would be best to avoid Facebook.

Not that people don’t want to read your drama, in fact, I can bet that the more drama you have the more traffic you will attract to your Facebook page/wall. But the reason people are reading your drama is because it offers them some kind of entertainment and makes them feel good about themselves.

They look at all the drama you have exposed of yourself on Facebook and tell themselves that they are glad that they are not you. My advise-don’t let people use you to feel good about themselves. Avoid the Facebook drama and here are a few tips on how to do just that:

Avoid using Facebook to vent out your anger: If you are angry it would be best to avoid the every minute status updates. It really looks cool when you first post and vent out your anger but after all the posting is done, the anger doesn’t reflect well on your personality.

Don’t share everything: Just because it is possible to post everything on Facebook doesn’t mean you should bare it all. Post what is necessary and if you want to share intimate details then please be double sure that you have a closed account or one restricted to number of real friends.

Don’t stress about people’s updates: Don’t assume that a post on Facebook is about you. Don’t let Facebook posts get the best of you and stress you out. Don’t take Facebook personal. Just don’t.

Avoid living a lie on Facebook. Try and stop convincing people that you are happy, rich, in love, born again, cool and whatever else. If you are any of these you will not have to prove it, it will show naturally.

Godsgift Uweghwerhen, a 25-year-old man, has been accused of...
FaceofMalawiNEWS