One of Malawi’s Human Rights Activists, Wonderful Mkhutche, has said the halt in the construction of Mahatma Gandhi Statue is not enough, and wants the whole project completely stopped.

The construction of the statue started about 3 weeks ago at Ginnery Corner in Blantyre, after recently being greatly criticised by citizens of Malawi, saying Gandhi did not contribute anything to Malawi to deserve such an honour.

The project stopped this week on Tuesday, 23 October, 2018, but neither the government nor the Blantyre City Council has commented on the matter as to why it has stopped.

Commenting on the halted construction of the statue, Mkhutche said it is a good development that the construction has been paused, but he is still waiting to for the government to lift the lid on why the project has stopped, and wants the project to permanently cease.

“We are pleased to hear that government has halted the construction of the Mahatma Gandhi statue. But we are yet to hear the reasons for the decision and that is why we are not comfortable and satisfied. We would like the whole project stopped for good. That is our goal,” he said.

Meanwhile, in South Africa there is a statue named after Gandhi. He was a human rights activist and once lived there. 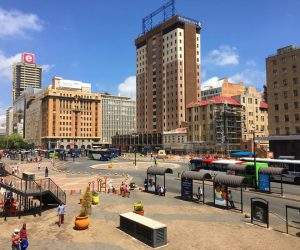 He was a professional lawyer and is respected by South Africans, and they built a bus terminus named after him, called Mahatma Ghandi Square.

The place is located in Johannesburg’s Central Business District and functions as the main Central bus terminus. 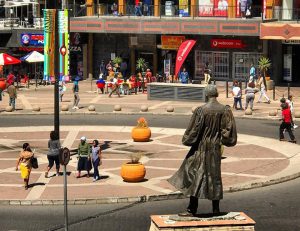 The 2.5 meter Gandhi statue was erected at the focal point of the terminus, and it is one of the attractive places in S. Africa.

However, when asked if it was as good as just letting the Blantyre City Council to go on with the project considering such an honour granted by a fellow African country on him, he said they did that in S. Africa for they were historically connected with him.

“No. Mahatma Gandhi and South Africa have a history together. That is where Gandhi learnt his political activism. It is different with Malawi. That is why we cannot follow suit,” he boldly said.