Chaotic supporters in Nsanje South Constituency led to postponement of National Initiative for Civic Education (NICE) Trust organised debate on Tuesday at Mpasa Community Day Secondary School, after supporters from the two camps could not maintain order to conduct a peaceful debate.

The supporters, mainly for Francis Kasaila of DPP and Kafandikhale Mandevana of Malawi Congress Party (MCP), failed to come to terms as they were drunk and kept rising up and dancing in praising their candidates without following protocols.

In an interview, the organisers described the situation as unfortunate as it failed to strengthen pillars of democracy by showing tolerance and respecting right to choice to prevail.

“It was bad, and shameful that up to date we cannot accept that people have right to choose who they want to support, it is their democratic right and I condemn the acts of violence that supporters from both sides have shown,” said Malunga.

He said despite the fracas, NICE Trust has managed to civic educate people who were present how to vote on polling day by demonstrating how it would be done.

In several interviews from the audience that were gathered at the debate session, they blamed parties for failing to control their support who failed to tolerate one another and in the end caused violence.

“I think the politicians had planned all this before, and they new the debate would not be possible, we saw how MCP supporters behaved when they had just arrived at the scene and how the DPP came in their party regalia on, I think that could be avoided by party leaders,” observed Beatrice Mission who was part of the audience.

At the gathering, contestants for DPP and MCP were asked to speak to their people to stop making noise and disturbing the progress of proceedings, however after Mandevana and Kasaila tried to calm the supporters but it fell on deaf ears.

When the tempers were high between the parties, stoning started, Kasaila stealthily slipped through the crowd while Mandevana was whisked away to safely.

Four police officers that were hired to offer security were overwhelmed to manage the crowd to order.

Governors for all political parties have since condemned  the violence acts and have called upon party followers and their leaders to desist from hate songs and acts that would anger their political counterparts. 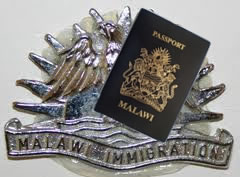