The court heard that on Friday morning Malawi National Examination Board (Maneb) officials found Boniface Thewe in his capacity as an invigilator answering Science examination questions on a separate sheet at Koche Examination Center.

State Prosecutor Sub inspector Maxwell Mwatuluka told the court that the invigilator was arrested for falling to comply with the conduct of national examinations contrary to section 7(b) of Maneb Act.

Appearing before court, the suspect pleaded guilty to the offence and was subsequently convicted.

Mwatuluka asked the court for a stiff penalty saying the invigilatorās conduct has huge potential of undermining education standards in the country.

āThe penalty should send a signal to the would-be offenders because teachers are supposed to lead by example in upholding education standards in the country,ā the prosecutor said.

In mitigation, the convict asked for a lenient sentence saying he is a breadwinner of his family and that many people depend on him.

However, Resident Magistrate Joshua Nkhono concurred with the State and said it is important to protect the integrity of the countryās education system at all cost.

He then slapped the convict with a K250, 000 fine or, in default, serve 36 months imprisonment with hard labour (IHL).

Thewe, 55, hails from Michesi Village in the area of Traditional Authority (TA) Mponda in Mangochi District. 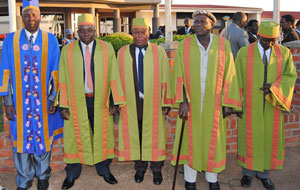