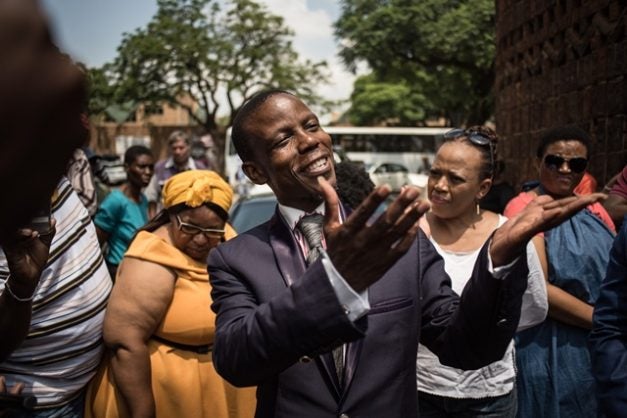 SOUTH AFRICA – Incredible Happenings Ministry church leader who go by the name after a male private organ  ‘Mboro’ Motsoeneng said he had proof of “dark” and “illegal” things fake prophets have been doing. These very same prophets have allegedly been paying some journalists to write false articles about him to divert the attention from them because of the information he has on them.

He said on Facebook live on Thursday: “There is a malicious attack from the so-called men of the cloth who have done heinous crimes, committing fraud, theft, murder, sexual assault, rape, abuse, buying some law enforcement agencies, buying some journalists and capturing them and destroying my reputation just to move away from their criminal activities to make sure that focus is diverted from them to me.

“They buy everybody to destroy my reputation, taking money from the poorest of the poor and promising them blessings and fortunes that they can never give.”

Mboro took to social media earlier this week to slam a fake article claiming he had gone to hell and defeated satan.

“Please be made aware that there’s a fake article which was posted saying that Prophet Mboro had gone to hell and defeated Satan. Such articles are made to destroy Prophet Mboro’s name and Incredible Happenings Church’s reputation.

“The only official Facebook page where you’ll receive notifications about Prophet Mboro and Incredible Happenings is (ProphetMboro Times), all these other Facebook page and accounts are fake which needs not to be taken into consideration, make sure that you report all these Facebook page, accounts and news,” he said.

He further warned his followers about the “visions” God showed him of what is to come in 2020, further claiming he had foreseen the SANDF helicopter crash in the DRC last week and prayed against it. As a result, the helicopter only crash-landed and no deaths were reported.

He claimed: “God showed me that 2020 is going to be the worst year. We’ll see more disasters. Last week Sunday, God showed me planes crashing. We prayed and on Monday last week there was a plane that crashed in the DRC, it only crash-landed and did not kill people because I prayed and stood in the gap.

“God showed me a storm that was going to destroy houses, in places including Ekurhuleni, we prayed and it didn’t happen. You can check on Google where there were articles predicting that and it did not happen. We prevented a lot of deaths around December and January.

“And God showed more deaths around celebrities, gospel and secular artists and that we need to stand in the gap. God showed me a lot of incurable illnesses that will come suddenly. Medical science is facing great challenges in 2020.”