Woman Who Claimed COVID-19 Was ‘Media Driven’ Hoax Dies It

Last week, a woman named Karen fell ill of COVID-19, not long after categorizing the virus as a “hoax”.

In a Facebook post, Karen Kolb Sehlke criticized the “media-driven” hoax “controlled by the radicals in power.”

Karen also believed that “our government is under attack from within” while comparing the virus to “the impeachment hoax” and saying that the people who think the current crisis is real “panic like sheep.”

In addition, she referred to the coronavirus as the “beginning of socialism.” Here is some of what she wrote.

“Wake up!!! This is what the beginning of socialism looks like!

They are leading with fear causing you to panic like sheep.

… You don’t need hand sanitizer, toilet paper, and Lysol. You need common sense, a sense of direction, faith, a will to fight, and of course guns!

Now wash your hands and live the life they don’t want you to have!” According to reports, she passed away on April 2 in Tomball, Texas due to kidney problems caused by the coronavirus. After her passing, her family created a GoFundMe page in order to cover the funeral costs, which has thus far raised $35,090.

Here is how some people reacted to the story:

I post this not to mock Karen Kolb Sehlke’s death, but to underscore the tragic risk one takes when taking this pandemic for granted. #RIP #StaySafe 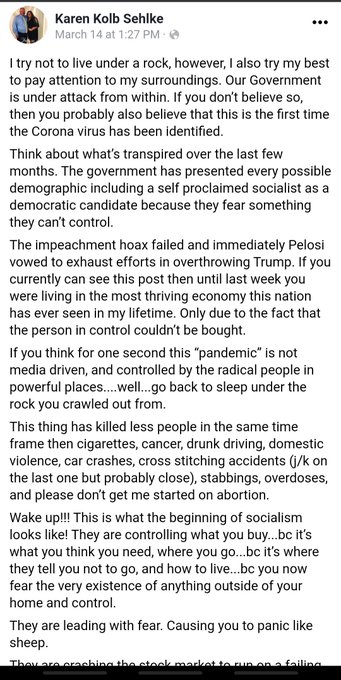 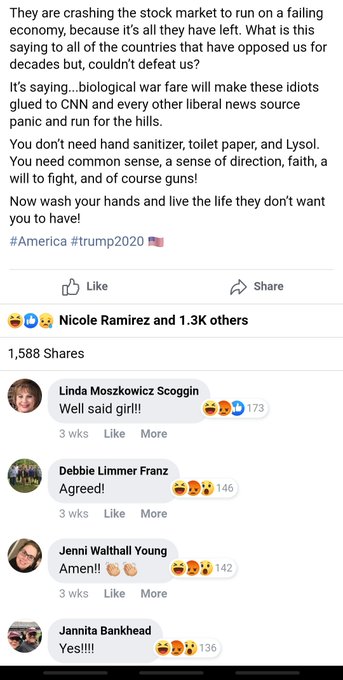 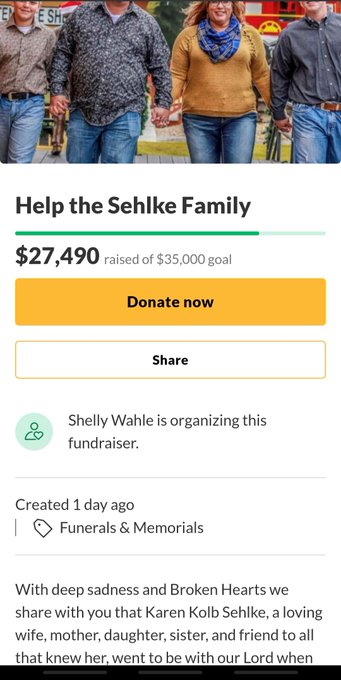 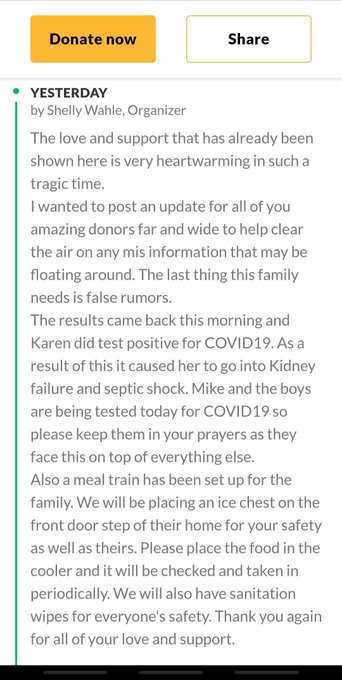 2,065 people are talking about this

Karen Sehlke, a Mom of 2 boys, took to FB on March 14 claiming Coronavirus is a hoax by Democrats to overthrow @realDonaldTrump. Today, exactly 3 weeks later, she is dead from #Covid

Trusting him will socially distance you from the rest of us forever… 6 feet under. #StayHome

46 people are talking about this

In other words: the death toll we are seeing is “people that tested positive for the the virus, and are now dead.” Not, people that have died FROM Coronavirus.

State departments of Public Health are reporting the number of deaths BEFORE the medical examiners have even concluded the cause of death. It takes Medical examiners weeks to determine. There would be no legitimate way to report how many people die “daily”. https://twitter.com/marclobliner/status/1246551864621109248 …

This was 2 weeks before Karen Kolb Sehlke passed. Likely she had it at the time she wrote this. It’s not Karen’s fault that she got infected and died – fault lies with people that misinformed instead of educating her. I think that’s enough reason to file a wrongful death lawsuit. 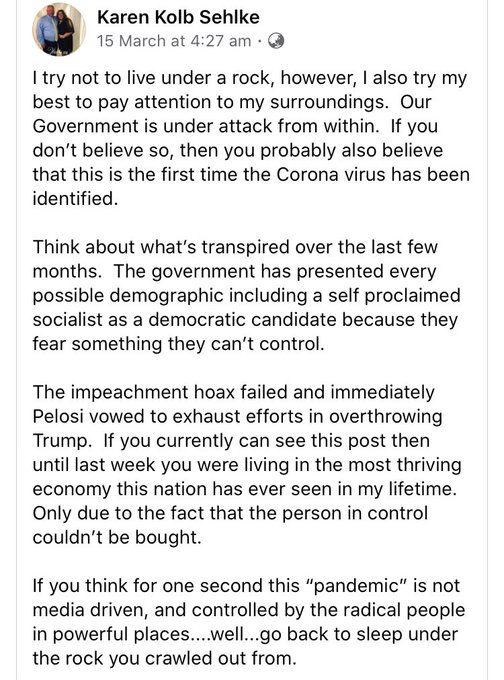 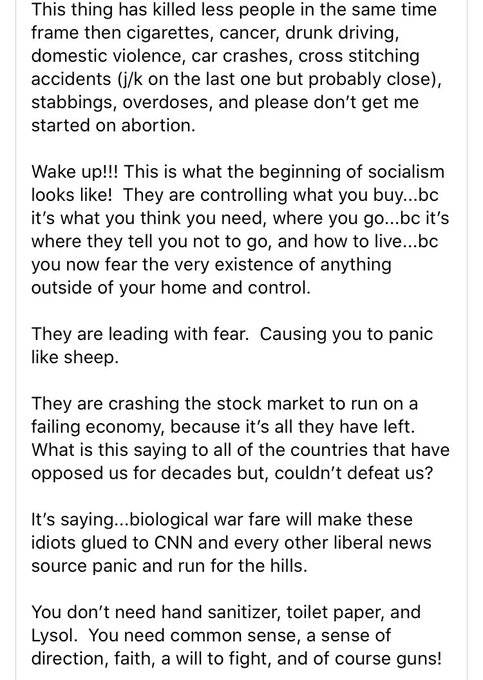 17 people are talking about this

I take no joy in the death of this woman who spread lethal lies and mocked those who took the #coronavirus pandemic seriously. It’s a tragic lesson – she paid for her willful ignorance with her life. Dont make the same mistake #KarenSehlke made.#COVID19Pandemic #coronavirus https://twitter.com/nobodyforprezzz/status/1246329743324188672 …

On March 14th, Karen Kolb Sehlke wrote a facebook post which implied that the #CoronavirusPandemic was a “media-driven” hoax.

By April 2nd, Karen Kolb Sehlke was dead as a result of #COVID2019.

We can’t show you everything!

70 people are talking about this

Sehlke made the Facebook post on March 14th. She passed away on April 2nd, killed by the virus she mocked.

Mornings are tough for most of us. Especially on...

If you live with a dog you, probably have...
FaceofMalawiNEWS