LILONGWE – One man has died at Area 43 in Lilongwe on Monday after an over speeding vehicle swerved to his side killing him on the spot.

Lingadzi Police Public Relations Officer, Salome Zgambo confirmed the incident identifying the deceased as Dickson Kalima. Other details about the deceased are not yet established.

She said Likomwa was driving the Honda CVR within new Area 43 and upon arrival at Plem Guest House he lost control due to over speeding.

“It has been established that Likomwa was over speeding and eventually lost control and swerved offside the dirty verge where he hit assorted items for sale before he swerved back to his lane and hit Sanudi’s vehicle driving towards same direction.

“Thereafter, Likomwa proceeded and hit a male pedestrian (now deceased), who was walking on the same dirty verge before he drove back to the far offside where he hit a gate belonging to Chidzanja Nkhoma’s residence,” said Zgambo.

According to Zgambo, the deceased died on spot after he sustained severe head injuries and multiple fractures. He was pronounced dead upon arrival at Kamuzu Central Hospital.

Police rushed to the scene but found the driver had disappeared from the scene of the accident, but he was later found and got arrested.

Police is, therefore, advising all road users among them motorists to avoid over speeding especially in residential areas but also observe road signs to avoid accidents and save lives. 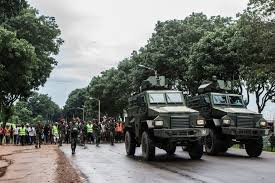 MDF to deploy solders during lockdown