A 65-year-old kung fu master is practicing an ancient technique known as “iron crotch”, which involves ramming a large wooden pole into his crotch to build-up the resistance of his private parts.

Wang Liutai is the curator of the Martial Arts Museum in Juntun Village, a small settlement on the outskirts of Luoyang, one of the four ancient capitals of China. He is also a kung fu master, but not the kind you’re used to seeing in old martial arts movies; Liutai specialises in a rare technique specific to Juntun known as “iron crotch”. It involves swinging a 2-meter-long, 40-kg-heavy wooden log with a steel plate cap straight into his crotch, while using qigong breathing techniques to steel himself.

A father-of-two, Wang has been practising iron crotch for half a century and claims that if done correctly, the kung fu technique does not hurt and does not affect fertility. The technique is just one of many devised in Juntun to help practitioners resist pressure, pain or hits to various sensitive areas. Other similar techniques involve iron throat, iron head, iron chest, and iron back, but iron crotch is definitely the rarest, with just 5 practitioners still around in the village

With the number of youths willing to keep iron crotch kung fu alive, the master of Juntun village came up with the visually-impressive swinging log. Before they had practised by kicking and punching each other in the crotch, and hitting themselves with bricks and sticks.

Iron crotch kung fu can only be practiced by men who have already reached adulthood, Wang said, and only under the guidance of a master who can teach the ancient secrets of the technique. Trying this type of training regimen without proper knowledge can result in serious injuries with potential life-long negative consequences. 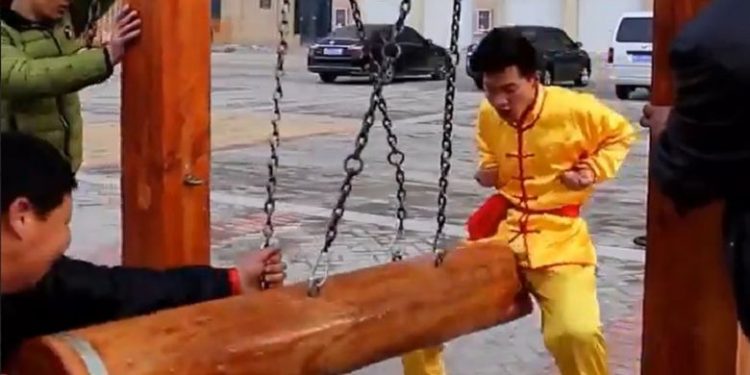 Zhang Jianguo, a Professor of Urology at the First Affiliated Hospital of Heke University of Science and Technology, told The Paper that, from a medical point of view, men’s lower body will be affected by such a violent trauma, with potential consequences including damage to the reproductive organs and infertility. Also, subjecting such a sensitive area to constant trauma may result in chronic injuries.

Wang Liutai claims that iron crotch does not involve retracting the testicles into the abdominal cavity to better handle the pain, but using qigong breathing to harden the sensitive organs.

As Chinese publication The Paper points out, while the iron crotch technique may sound intriguing to the average person, its main drawback, and perhaps an explanation to the low practitioner count, is that it’s not very practical. Most martial arts help people better defend themselves, or provide much-needed exercise, but this just makes your crotch very resilient…