ZIMBABWEAN GOLD SMUGGLER OUT ON BAIL

Masinire aged 33 years old was arrested at the OR Tambo International Airport on Sunday, April 9.

Masinire was traveling from Zimbabwe to South Africa and was found in possession of 23 pieces of gold worth R11 million (K627,880,000).

Upon his arrival in South Africa, custom officials requested to scan Masinire’s luggage, during which the pieces of gold were found.

The suspect however failed to declare the gold, nor did he have a permit or license to possess it.

Masinire has since been ordered not to leave South Africa and to report to the nearest police station three times. He is expected back in court on 1 July. 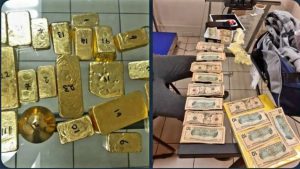