At least 9 people were killed when a five-story building undergoing demolition collapsed onto a bus in South Korea on Wednesday, June 9 according to a new statement from the country’s Ministry of the Interior and Safety.

The bus, which was stationary at the time of the indident on a busy road, was buried under the rubble in Gwangju, some 270 kilometers (168 miles) southwest of the country’s capital, Seoul.

The statement also adds that 25 people were injured, including eight seriously injured. 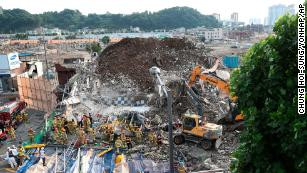 The 16 demolition workers on the site are safe and did not sustain any injuries as the building collapsed, the statement concludes.

Following the 190 firefighters were deployed for search and rescue, with police joining the rescue effort.

As at press time, the reason for the collapse was unclear, Reuters reported, citing officials at the Gwangju Fire and Safety Headquarters.

For some time South Korea has tried to improve the standard of it’s infrastructure ever since it recorded tragedies of infrastructure collapses in the 90s.