The Only On and Off This Island Is by Industrial Crane

Minami-daitojima, a small Japanese island surrounded by raised coral reef, has no beaches or docks, so the only way for people or boats to make it on the island is to be flung through the air by large industrial cranes.

A round uplifted coral island in the Okinawa archipelago, Minami-daitojima, aka Daito Island, has been using cranes to get people and small boats on and off for the last 50 years. Because of the coral reefs surrounding it, ships can only moor up to 4 to 6 meters away, so this method is the safest and fastest to reach or leave the island. Boats are secures with straps and chains, while people have to get in an elevator-like cage, fasten the door and then get flung through the air by an industrial crane on the island. The experience has been described both as “terrifying” and as “fun” as an amusement park ride.

Daito Kaiun, the company in charge of operating the crane, apparently inherited this ingenious method from another company that went bankrupt decades ago. Mr. Tomonori Miura, who runs operations on Daito Island, told Japanese website J-Town that building a sturdy dock would be expensive and difficult, so this unusual method is preferable. 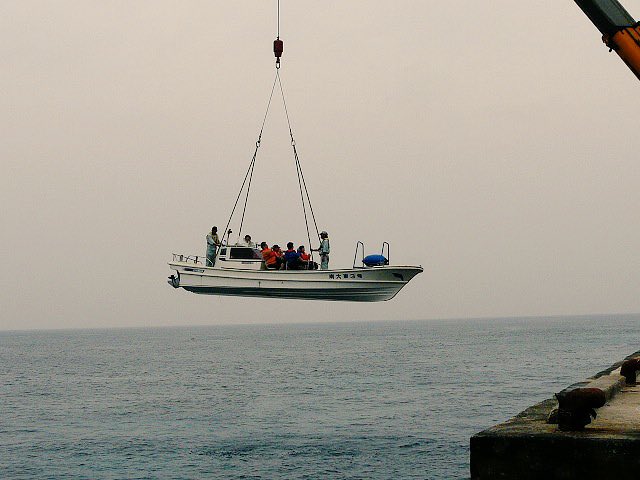 Miura said that his company uses two types of cages to hoist people on and off the island – one without a roof for fair weather, and a completely closed one for rainy and stormy days.

“I was surprised that the speed was faster than I expected. I had more fun than fear, but I think people who are not good at high places would be pretty scared,” Mr. Tanuki Neko, who recently went to Daito, told J-Town.

Luckily for people too scared to use the crane system, Minami-daitojima is also accessible by plane, although only 1-2 flights are usually available per week, due to unpredictable weather.

9 out of 20 suspects who were arrested for...
FaceofMalawiNEWS