A statement signed by Secretary to the President and Cabinet Zangazanga Chikhosi advises that all ministerial powers for the ministry have now been assumed by the President.

It is alleged that the trio is accused of attempting to influence the award of fuel supply contracts at the National Oil Company of Malawi (NOCMA).

According to the ACB, the investigation established that Kambala attempted to influence NOCMA to award contracts of 2020/2021 fuel supply for the advantage of Orxy, Finergy, and Trifugira Fuel companies.

It was also established that Chihana and Mr. Chris Chaima Banda aided and abetted Kambala when he attempted to influence the award of the contract to supply 40000 metric tons of fuel to a company known as Finergy.

They were arrested on Monday and interrogated by the ACB.

Chihana and Chaima have both been charged with conspiracy to influence abuse of office and attempting to influence a public officer.

All three suspects have denied the charges. 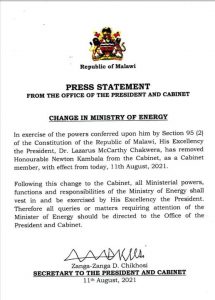