The body of former President Mwai Kibaki will this morning be escorted from Lee Funeral Home to State House where a guard of honor will be mounted one last time in the place he called home for 10 years.

At 9 am, the procession will depart State House for Nyayo National Stadium, where the state funeral will be held in his honor ahead of burial at his Othaya home tomorrow. 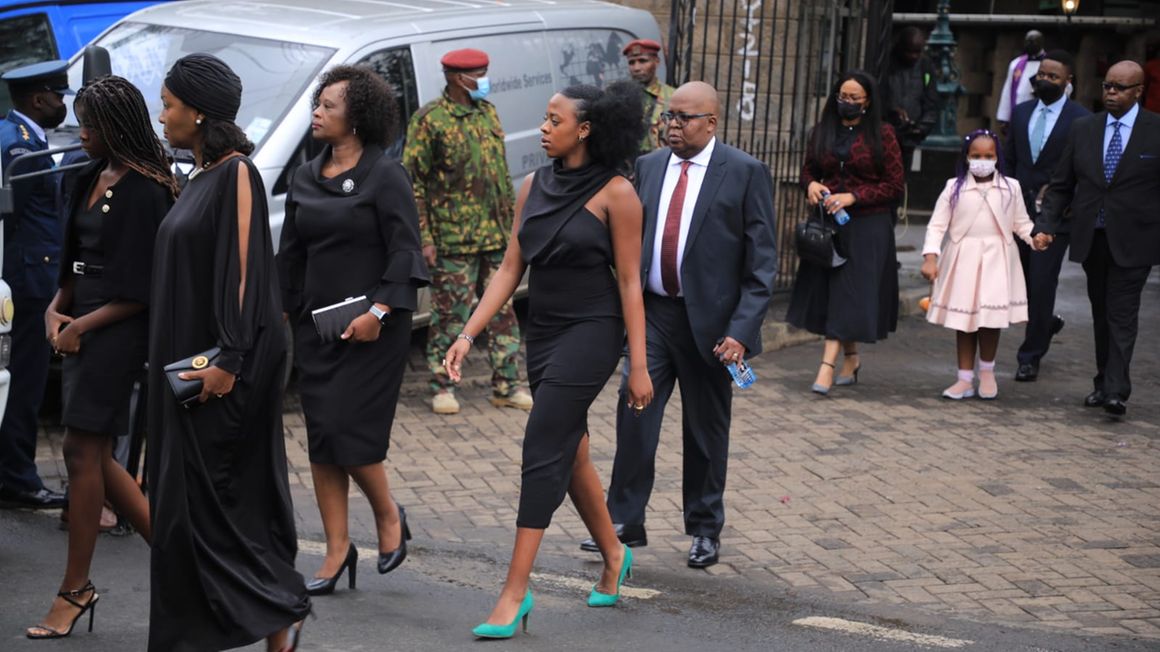 The six-hour send-off program for Kenya’s third President will be a largely military affair.

Foreign leaders, including South Africa’s President Cyril Ramaphosa, are expected to arrive at 10.20 am for the ceremony to pay tribute to Kibaki who died last Friday, aged 90.

The Kenya Defence Forces’ (KDF) gun carriage with the casket draped in the Kenyan flag will leave Lee Funeral Home for State House escorted by outriders.

At State House, a brief guard of honor will be mounted and the National Anthem played as President Kenyatta, alongside First Lady Margaret Kenyatta, receive the body of his predecessor who led Kenya from 2003 t0 2013.

In a slow march, the casket will then be taken inside the State House for a brief Mass led by military chaplains.

A photo session will then follow and the casket reloaded to the gun carriage.

The procession will leave State House at 9 am for the 5.1-kilometer journey to Nyayo National Stadium where Kenyans will be waiting.

The procession will be led by a military band and other formations, who will march to the stadium followed by the gun carriage that will be occupied by Brigadier Jeff Nyagah and the colonels who have assumed the role of pallbearers. 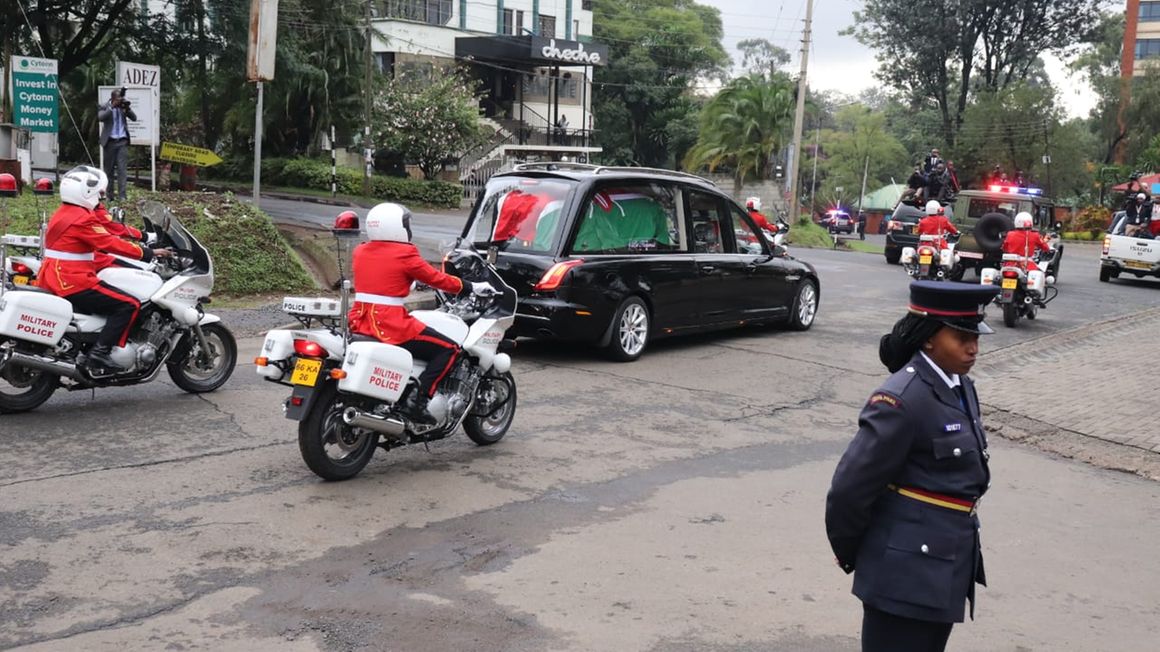 Behind the gun, the carriage will be KDF officers from the Army, Navy, and Air Force marching in ceremonial outfits.

President Kenyatta and the First Lady will arrive at Nyayo stadium at 10.30 am and the state reception for Kibaki’s funeral procession will begin at 10.45 am with a guard of honor followed by a procession to the altar.

The casket will be surrounded by family members, military generals, pallbearers, and religious leaders from various denominations all of whom will occupy a tent in the middle of the stadium. 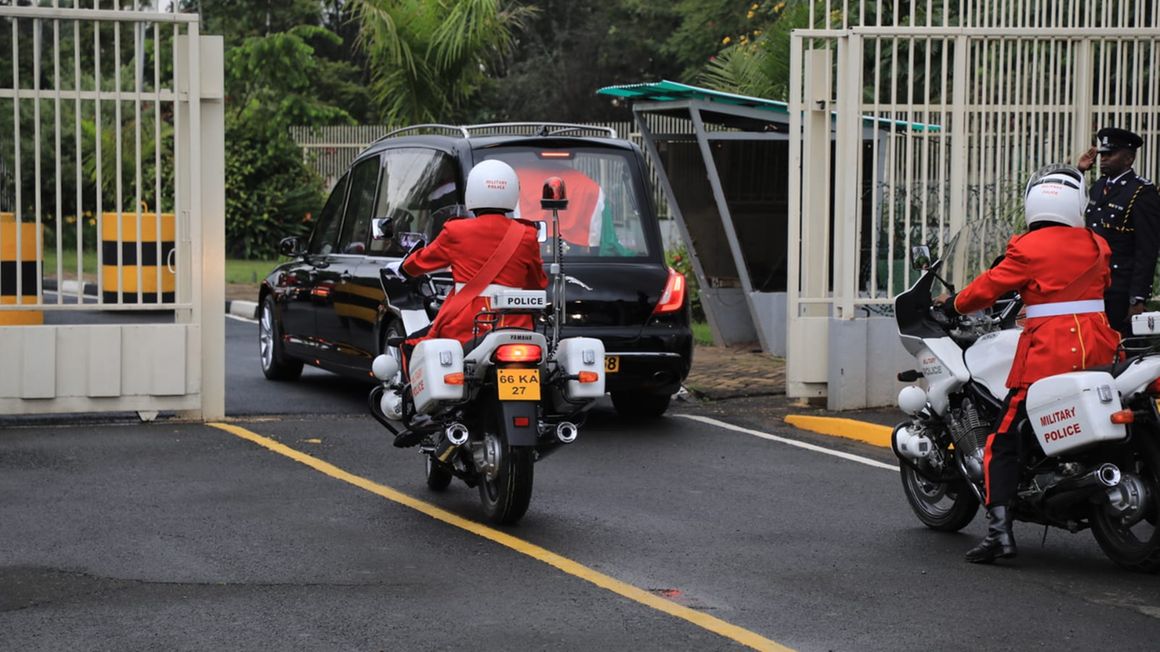 The body of former president Mwai Kibaki arrives at State House Nairobi on April 29, 2022 ahead of a state funeral service to be held at Nyayo Stadium. PHOTO | JEFF ANGOTE | NMG

The National Police Service has warned motorists to be wary of traffic disruptions on Processional Way, Uhuru Highway, Kenyatta Avenue, and Aerodrome Road to allow for the cortège’s movements.

Yesterday, military officials rehearsed their movements and prepared the venue with characteristic precision.

Security has been beefed up at Nyayo stadium and the surrounding areas by officers from the National Police Service and the military, which is in charge of the entire event.

Kenyans attending the Mass will be seated at the terraces and will follow the proceedings from the screens mounted at the four corners of the tent.

The government has not restricted the number of attendees to the stadium, which has a capacity of 30,000.

Once inside the stadium, the attendees will be entertained by multiple choirs, which have been scheduled to perform at the mass.

They include the Kenya Army Band, which will lead in the national and East African anthems, the State House choir, and the Starehe Boys Centre Band.

Archbishop Anyolo of the Catholic Church, Nairobi Diocese, will be the main celebrant at the Mass, but other denominational leaders will have a chance to participate.

Flags will be hoisted at half-mast at the stadium. Those attending will be expected to be seated by 8 am.

Three African heads of state, vice-presidents, prime ministers, and the secretary-general of the Commonwealth are among the dignitaries expected at the event.

Others are the prime minister of Rwanda, vice-presidents of Zimbabwe, Tanzania, and Uganda, the former President of Malawi Joyce Banda, and the special envoy of Sri Lanka.

Tomorrow, Kibaki’s body will be ferried to Othaya Approved School Grounds by road using the Lee Funeral Home’s hearse, whose clear glass windows will allow Kenyans a chance to view the coffin as the cortège makes its way to Kibaki’s final resting place.

At some point closer to the school, soldiers will load the casket back onto the gun carriage for the final slow procession into the Othaya Approved School grounds where the burial ceremony will be held ahead of interment at Kibaki’s Mweiga home.

Mr Kennedy Kihara, the Principal Secretary in the Office of the President, said at least 15,000 mourners are expected to attend the burial ceremony but will be restricted from attending the final rites at Kibaki’s rural home in Mweiga.

The ceremony at the approved school will be conducted by Nyeri Catholic Archbishop Anthony Muheria.

Archbishop Muheria eulogized Kibaki as a humble servant who has left a great legacy through his style of leadership.

“He would come to church like other congregants every Sunday. Kibaki would kneel to pray despite his advanced age even when we asked him not to,” Archbishop Muheria told the Daily Nation. “This shows his humility in prayer. It was a reflection of his style of leadership.”

Mwai Kibaki, who was born to Kibaki Githinji and Teresia Wanjiku in Othaya on November 15, 1931, was the lastborn.

Only one sibling, Waitherero, lives. His other siblings were Wangui, Githinji, Kinyua, Nderitu and Waruguru.