One marauding lion that had been reported roaming around Shimabala area for the past 14 days has finally been located and shot dead as all efforts to tranquilize, capture and translocate it proved futile. 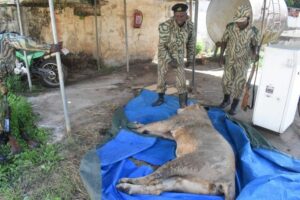 Toursim Permanent Secretary Evans Muhanga said the a sub- adult male, was brought down by the Department of National Parks (DNPW) officers in the early hours of today, 14th May 2022, when it was flushed out of its hiding place in the thickets and suddenly charged towards the officers in attack.

He said the officers, who set out to tranquilize the animal with the intention of capturing and translocating it to the Lower Zambezi National Park, where it was suspected to have originated, were left with no option but to bring it in order to save the lives of the officers and the public.

Mr. Muhanga said since, there have been rumours circulating about suspected presence of more than one lion, we wish to caution members of the public to be on high alert and to promptly report confirmed sightings or observations such as spoors (footprints) and attacks to humans or depredation on livestock.

The Ministry of Tourism is, however, concerned with abuse of social media by people who have been posting false videos, images and alarming statements to the public and wishes to warn those providing false information that do so constitutes an offence and that any persons providing such information risk being arrested and prosecuted by the relevant authorities.

According to the information three heads of cattle and one goat are suspected to have been killed by the rogue lion. Sadly, we have also observed that some rustlers could be taking advantage to steal/kill domestic livestock using the lion situation to conceal the offences.

We wish to particularly thank the Zambia Air Force (ZAF) who provided aerial surveillance to locate, sight and communicate information to ground troops and the Honourary Wildlife Police Officers (Lusaka Unit) as well as the Professional Hunters Association of Zambia (PHAZ) who provided the resources to ensure the success of the operation.

Finally, the Ministry remains committed to respond to Human-Wildlife Conflict reports in order to safeguard human life and property.