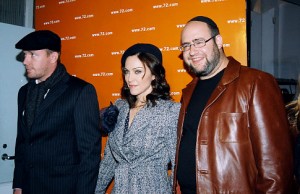 The Kabbalah Center in Los Angeles is patronized by a number of celebrities including Madonna (above, center), Demi Moore, Ashton Kutcher and Donna Karan.

LOS ANGELES – The feds are stepping up their criminal probe of Madonna’s beloved Kabbalah Centre.

New York investigators subpoenaed documents from the Los Angeles-based spiritual organization in the last 10 days amid allegations its founding family treated the nonprofit like a personal piggy bank, sources told the Daily News.

The family, led by Philip and Karen Berg, has controlled the celeb-friendly outpost of Jewish mysticism for decades.

Madonna and A-list pals including Demi Moore, Ashton Kutcher and Donna Karan have been big supporters, especially with the group’s Spirituality for Kids program, another target of the probe, sources said.

Son Michael Berg co-founded Madonna’s Raising Malawi charity but was replaced recently as its chairman after an audit of its failed effort to build a girls school in the impoverished African nation.

Sources said the Bergs deny any wrongdoing and have hired former U.S. attorney and Fordham Law Prof. Mathew Rosengart to represent the group.

“The Kabbalah Centre and SFK have received subpoenas from the government concerning tax-related issues,” the centre said in a statement. “[We] are in the process of providing responsive information.”

“We’re looking forward to having all legal issues and inquiries resolved so that Raising Malawi can get back to its work helping the most vulnerable children of Malawi.”

The investigation, which began last year, reportedly is zeroing in on off-the-books expenditures by the Berg family, sources said.

“I have little choice but to cooperate with the IRS and bring down the Kabbalah Centre.”

Source said Vakkur worked for the Bergs for three months last summer and sat down with IRS investigators for a recent three-hour interview.