The ongoing erratic supply of fuel is causing misery to most Malawians, with minibus fares and other basic needs going up.

The fuel shortage has also proved to be a fertile ground for corruption, according to Ezara Jonasi, a minibus driver in Malawi’s commercial city, Blantyre, who revealed that minibus drivers are being forced to give tips to fuel attendants to buy fuel.

For example, the minibus fare from Ndirande Township to Limbe was K70 (about $0.46) but it has shot to K120 (about $0.78), with four passengers on each row against the recommended three passengers per row, as per Road Traffic Directorate regulations.

On most routes, according to spot checks by The Nation, fares have gone up and passengers are being forced to pay the new fares or get off.

“We are spending six or eight hours looking for fuel, in some cases tipping the attendants to buy fuel. If we cannot increase fares, there is nothing we can make. This is total crisis.

“Most minibuses have parked and there is always pressure on the few that manage to get fuel. You can even see for yourself that traffic has drastically reduced on the roads. This has been the worst fuel shortage,”

The Nation observed that in some service stations, there is no fairness as some vehicles loaded with drums are allowed to fill about three drums or more, yet others with a five-litre container remain on the queue.

Some motorists have parked their vehicles at home or offices waiting for a day fuel supply will normalise.

With shortage of minibuses in some townships, others have resorted to walking to office. 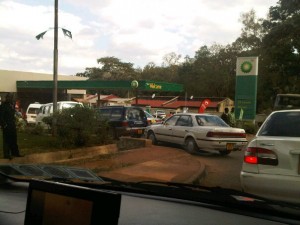 Energy Minister Grain Malunga told The Nation last week that Malawians should get used to this fuel crisis.

Minibus Owners Association of Malawi (Moam) general secretary Coxley Kamange said his office has received complaints on the sudden fare hikes and officers were sent out to check the malpractice.

Kamange said there was no need to hike fares. He said it is illegal because minibus drivers and conductors cannot do that on their own.

On overloading, Kamange said loading four people per row was illegal and appealed to passengers not to allow that or report such cases to his association or police.

He said if there was corruption in service centres, minibus operators should take responsibility to report to the Malawi Energy Regulatory Authority (Mera).