July 4, 2011
Imagine that your mother has just brought you into this world. Then, instead of bringing you with that motherly love and care a mother is proudly known for, to later mature into a productive member of society, gets rid of you by dumping you in a public toilet. This nerve shaking activity has become rampant in Malawi. 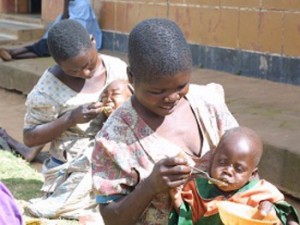 The atrocities are being committed by mostly teenage mothers. A snap investigation reveals that among other things, increase in baby dumping and killing are as a result of frustrated young women.

“I had decided to strangle my three-month-old baby boy. But, after a second thought decided to dump him in a trench because he acted as an obstruction to my business. I am a commercial sex worker,” said a 19-year-old girl, who chose to be only identified as Christobell, while taking a cold Carlsberg Special Brew beer around 21:00 hours at one of the popular drinking joints in Lilongwe despite the biting chill June weather.

She disclosed that she dropped out from a technical college since there was no one to continue paying schools fees after her parents died in a road accident and their property grabbed by her father’s relatives.

“So I turned to prostitution and in the course of sleeping with my clients one day I got so drunk and slept with a client without putting on a condom hence missed my period,” Christobell recalled.

The college dropout said she could not trace the client and imagine having a child without a father.

“This baby came without my planning so I had no choice but dump him,” she said unperturbed. .

Chikuni disclosed that Salome was hiding her pregnancy for nine months until on March 5 this year. She said that around 2a.m, the young lady started experiencing labour pains. Salome then went to a nearby bush at around 6am of same day where she successfully delivered a baby girl.

“After giving birth, Chirwa then wrapped the newly born baby using a cloth and threw it into a toilet,” Chikuni was quoted by Malawi’s tri-weekly newspaper, The Guardian recently.

She added that it took some villagers who had heard a child crying inside the toilet tipping the police to discover what had happened.

Chikuni disclosed that some villagers dug the toilet and removed the child from the pit-latrine before policemen arrived on the scene.

“Upon conducting investigations in the village, it was discovered that Chirwa, who was not married, had been concealing her pregnancy and that she was the one who mothered the child,” she said.

The baby survived the incident and was admitted together with her mother at Ntcheu District Hospital.

According to Chikuni, Salome was later to appear in court to answer charges of concealment contrary to the penal code of the southern African country (Section 232 of Malawi’s Penal Code).

Police records reveal that a similar incident also happened in Chikanda Area in Zomba where Mariva Kachere, after giving birth to a very healthy baby boy also dumped it into a pit-latrine.

Mariva’s was a cautionary tale since she decided to kill her newly born baby because she was afraid of her husband working in Zimbabwe. When the husband left for Zimbabwe, Mariva was not pregnant, however, tired of waiting for the spouse, she engaged another man who impregnated her.

Like Salome, Mariva successfully concealed her pregnancy for nine months, but failed to hide the birth of her baby from her neighbours.

She delivered the baby; it was learnt in a bathroom just next to the same pit-latrine where she dumped it immediately.

With the help of her own younger sister Mary, Mariva even threw stones, poured hot water in the pit-latrine to make sure that the baby was dead. Mary later recalled that when their father, Kachere wanted to go to the toilet to answer to the call of nature, she together with Mariva also ran to the same direction raising suspicions.

“Our father heard a cry from the toilet and called neighbours and the Traditional Birth Attendant (TBA) to come and help rescue the baby from the pit-latrine,” said Mary.

She added that she had no idea then that her sister, Mariva had just given birth to a baby.

“None knew that my sister was pregnant and when I was helping her to throw stones and pour hot water into the pit-latrine, I thought we were trying to kill an animal of some sort and I was not aware we were after eliminating the life of a newly born baby,” she added.

On her part Serina Naliyera, the TBA said she was alerted to the incident at her home at around 3:30 a.m. on the same night and shocked that Mariva had decided to dump her baby in a pit-latrine.

“This even greatly worried me. When I was told about the incident I immediately picked up my torch and made it direct to the scene of the incident to protect the newly born innocent baby,” said Naliyera.

She added: “Lucky enough we managed to find the baby alive. Soon after the baby was rescued I myself went straight to report the matter to the police for Mariva had to answer before the law for her gruesome misdeeds.”

Zomba Police confirmed the incident and said soon after receiving the report their personnel picked Mariva and kept her in custody.

The law enforcers then said soon after the baby had recovered from Zomba Central Hospital (ZCH) where Mariva and her mother were admitted for clinical observation, the next step was charging Mariva with [attempted] man-slaughter.

Towera Chipeta who was a matron at ZCH during the incident said the baby had been on antibiotics and his life not been in danger then.

Chipeta further said although Mariva had earlier attempted to kill her newly born baby, she then made a dramatic u-turn by pleading with authorities to raise the child herself.

Mariva made the plea by rejecting joint suggestions by hospital and social workers in Zomba that her baby be put into an orphanage than to be raised by herself for fear that she might make another attempt to eliminate the baby’s life once more.

“She [Mariva] said she could care for the baby herself and we accepted…and then she was discharged, she went back home. However, a social-welfare-worker was to keep Mariva under surveillance and monitor the baby’s upbringing,” said Chipeta.

The hospital and the social-welfare-workers agreed to keep an eye on Mariva because there was still no assurance that she could not make any other more attempts to eradicate her baby’s life after her first attempt.

Blantyre City also had its own sad story to tell when a woman strangled her own newly born baby and dumped it in a maize garden in Bangwe Township.

Limbe Police Constable Julia Kazembe was accompanied by residents to the scene and lived within the same area where the incident occurred, collected the remains of the murdered baby and put them in a sack then.

“After she gave birth, she strangled the baby to death using a cloth around its neck and took it some metres away where she buried it,” she said.

Isaac Mdoka, a resident of Bangwe Township who was informed by Kazembe of strangled baby said whoever is caught dumping or killing children should severely punished to deter others from practicing such evils.

“It’s very pathetic that a mother can give birth and decide to kill the child. This is a very sad development,” said Mdoka also former Member of Parliament for Blantyre City West during former president Bakili Muluzi’s regime.

In Nkhata Bay, police records also confirmed that they found a baby girl in a drain near Nkhata Bay Bus stop believed to have been dumped by a woman they had suspected was a commercial sex worker.

The baby was discovered tirelessly crying and covered with grass band and had blood stains on its body.

“The baby looked healthy despite puss discharges from its eyes,” said a clinical officer at Nkhata Bay Hospital adding, “Such discharges are an indication that the mother had Sexually Transmitted Diseases (STDs).”

According to a medical report which described the way the baby was handled, revealed that the mother who had dumped it was well-versed in delivery procedures because she managed to control bleeding from the baby.

“This practice should never be tolerated because it constitutes a gross human rights violation,” charged Chanika.

She was, however, quick to add that the rising problem of baby dumping or killing in Malawi wears different faces and therefore, has to be treated thus.

“We should ask ourselves, why do these girls do these things? And then we will start to solve the problem from that point,” said Chanika adding, “I suspect the dumping is as a result of unpreparedness and worry over responsibility after the baby is born.”

She said there was a need to encourage all members of society to jointly provide maximum counseling to young women who are suffering from many social-economic problems in the country.

“There is an urgent need to give them assurance that there is a solution for whatever problem they experience than dumping or killing one’s own baby,” said Chanika.

A study by the UNDP in Malawi reveals that women and girls rely on men financially to sustain their lives.

To empower the poor including women and girls financially, Malawi Government under President Bingu wa Mutharika launched the Youth Enterprise Development Fund (YEDF) and the Malawi Rural Development Fund (MARDEF) to borrow money to create self employment through investing in small scale businesses.

Former spokesperson for the Ministry of Agriculture Gracian Lungu...
FaceofMalawiNEWS