Malawi on the Brink: The July 20 Movement 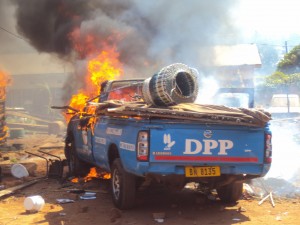 July 20, Malawi was engulfed by protests and riots against President Bingu wa Mutharika’s increasingly bankrupt regime, which left several people dead and many others injured. There was also widespread destruction of property across the country’s major cities. The immediate causes of the growing popular disaffection include deepening authoritarianism and arbitrary power reflected in the passage of draconian laws against civil liberties; worsening economic mismanagement as manifested in shortages of fuel and foreign exchange, power outages, rising unemployment and inflation; the dangerous mobilization of ethnicity as evident in the redistribution of jobs in the public sector to favor people from the president’s ethnic group; and desperate attempts to manipulate the president’s succession for his brother, a former law professor at Washington University in St. Louis, Missouri.

The protests and riots of July 20 are fundamentally about governance and development, the enduring desire among Malawians for the establishment of a sustainable democratic developmental state. It underscores the fact that economic growth without development is not enough. Over the last five years Malawi’s growth has averaged 7%, peaking at 9.8% in 2008. But the benefits have gone to a few as poverty remains rampant. Also, this growth hardly put a dent in the country’s reliance on foreign aid, which accounts for up to 40% of the national budget. As Dambisa Moyo has demonstrated in her controversial book, Dead Aid, aid has certainly not provided a reliable recipe for sustainable development in Malawi.

Contrary to stereotypes about the docility and peaceful nature of Malawians, Malawi has a long history of mass protests going back to the colonial era including the struggles against the Federation of Rhodesia and Nyasaland that saw the demise of the federation and the country’s independence in 1964. In the early 1990s, mass protests culminated in the collapse of President Banda’s iron-fisted dictatorship in the multi-party elections of 1994. As with the “first independence” from colonialism, the heady hopes of progressive transformation hit against the sturdy structural blockages of the postcolonial order rooted in the deeply entrenched deformities of the colonial state.

The next ten years were marked by fitful advances and setbacks under President Muluzi’s lackluster regime. As in much of Africa undergoing democratic transitions it became increasingly clear that the road to democratic consolidation and development would be long and bumpy. Africa’s wily dictators and unimaginative political class seemed keen to frustrate popular demands and hopes for the “second independence” from postcolonial authoritarianism and stagnation. After failing to extend his rule for an unconstitutional third term, President Muluzi thrust the relatively unknown international technocrat Bingu wa Mutharika upon the nation as his successor. Predictably, the two men fell out as President Mutharika sought to consolidate his power. He bolted from the United Democratic Party still chaired by former President Muluzi and formed his own party, the Democratic People’s Party.

During President Mutharika’s first term, a strong opposition prevented this political comedy turning tragic. Held in check by the opposition and surrounded by some competent ministers, the country registered remarkable economic growth and made noticeable democratic advances. In the 2009 elections, the DPP was rewarded with an overwhelming victory. That is when the problems started and the political gloves were removed to expose the entrenched structural instabilities of Malawi’s political order and the deep insecurities of the president himself. Malawi, like many postcolonial African countries, suffers from age-old processes and patterns of uneven development that intersect with wide regional, class, gender, and generational disparities, which politicians are adept at mobilizing and exploiting.

Above all, as Frantz Fanon noted in his searing indictment of the postcolonial elite in The Wretched of the Earth, the commitments of Malawi’s craven political class is more towards ‘primitive accumulation’ than a national project of broad-based development and democracy. President Mutharika embodies the contradictions of Malawi’s political system and the crassness of Malawi’s political class. Like so many other so-called ‘peaceful’ African states, such as Senegal, the country has yet to make a generational transition in its top leadership. Thus, while many sectors are dominated by the post-independence generation, the president is an octogenarian autocratic who should have long retired from public life as he clearly is out of tune with the aspirations of his relatively young nation.

President Mutharika, 77, belongs to the nationalist generation that brought the “first independence” while the vast majority of the population was born after 1964 indeed 45% of the country’s 15.2 million people are below the age of 15. To them the president’s nationalist anxieties and preoccupations with colonialism and admonition of Britain, the former colonial power, whose ambassador was expelled from Malawi several months ago for referring to him in a leaked embassy cable as “ever more autocratic and intolerant of criticism”, are outdated and irrelevant.

Added to this is the president’s apparent megalomania evident in his love for titles including unearned academic titles. For someone who never received a PhD from an accredited institution and never taught at a university he insists on being called His Excellence Ngwazi Dr. Professor Bingu wa Mutharika. He fancies himself an economist and mister-know-it-all. He has removed competent people from key economic ministries and institutions. He increasingly bases economic policy on his misguided understanding of Malawian, let alone African, economic and political history as is clear from his ill-written 700 page book, The African Dream: From Poverty to Posterity, published by his daughter and launched to great fanfare earlier this year.

It is the president’s outdated fidelity to the nationalist politics of the 1960s that partly explains his myopic admiration for Malawi’s founding president, whose policies and even dress he tries hard to emulate. The two presidents also share another commonality: they came back to rule after decades spent in exile and exhibit deep disdain for their people. They represent the ugly face of diaspora politics, its modernist conceits, its superiority complexes. President Mutharika’s contempt for Malawians is evident in his condescending speeches and his shock that the people of Malawi are not grateful for his leadership. In a bizarre juxtaposition on July 20, while people were demonstrating around the country, the president was giving a rambling “public lecture” on the country’s political independence, sovereignty, good governance and the economy. The gods showed their wrath and ironic humor when power went off for thirty minutes as the professor president was pontificating.

Like President Banda, whose thirty year dictatorship came to an ignoble end, President Mutharika is assured of being cut to size by the people he despises and has come to take for granted. Indeed, of Malawi’s three presidents to date, he is arguably the worst. He combines President Banda’s authoritarianism without the competence of his government, and President Muluzi’s corruption without his government’s tolerance for democracy. The way President Mutharika has bungled the country’s economy and politics boggles the mind. He badly mishandled the July 19 protests, first banning them and making threats, then allowing them to go ahead, before orchestrating a court injunction to stop them on the night of July 20, which only inflamed the crowds that gathered the next morning and ensured the violence that ensued. Perhaps the worst mistake he has made is deploying the military to patrol the streets and re-establish order. African history shows that governments that come to rely on the military to maintain civil order create the very conditions for their ouster by the military.

President Mutharika has unleashed a beast that will consume his regime. The longer the impasse continues, the more both the military and masses will feel emboldened. The danger lies in the military taking matters into its own hands. The best scenario would be for the military to step back and allow the political process to take its course as they did in the aftermath of the 1992 referendum that introduced multi-party democracy. Having overthrown President Banda’s dictatorship, the people of Malawi can take care of President Mutharika’s bankrupt regime by themselves sooner or later.

The regional and international community can assist them by isolating the regime. This might include imposing targeted sanctions at the president and his coterie of key advisors and beneficiaries. In the meantime, human rights activists must keep score of the state perpetrators of violence against peaceful demonstrators and opponents of the regime for eventual legal accountability whether in the country’s courts or even the International Criminal Court.

At the time of this writing, the international media is reporting that at least 18 people have been killed by trigger-happy police and some thuggish elements from President Mutharika’s ruling party who were instigated and called upon prior to the demonstrations to “deal with” anyone demonstrating against the government. President Mutharika’s moral bankruptcy and failure of political leadership has been revealed in his reaction to this tragic turn of events. In a brief, rumbling address to the nation delivered on state controlled radio and television, he failed to show any real understanding of the root causes of the problems that have brought ordinary Malawian citizens to the streets. Instead, all he could offer by way of explanation is the bizarre claim that the demonstrators are enemies of the country who have been instigated or are led by Satan. More tragically, in his speech President Mutharika failed to do what any decent political leader would do in such a situation: the basic act of offering condolences to the families of the 18 individuals killed over the last twenty-four hours. He simply failed to acknowledge or mention these innocent deaths. Malawi, or indeed any other country, does not deserve such leadership.

BY PTZeleza in African Affairs