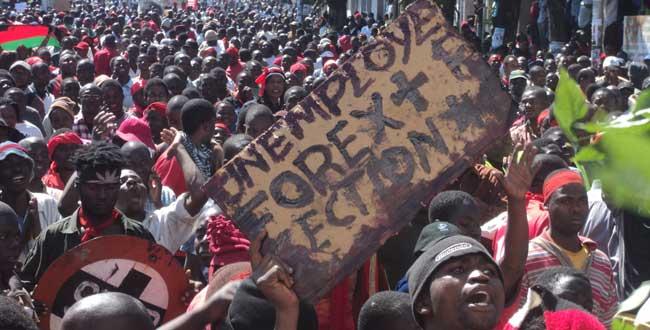 Organizers of the planned 17th August on Tuesday organized a press briefing explaining of the cancellation or what they call postponement of the much anticipated nation wide vigils. Coming from organizations such as HRCC, MHRC, MEHN the representatives stated two reasons for cancelling the vigils as being the injunction sought by concerned individuals restraining the civil society from proceeding with the vigils and also the fact that they wanted to give room to contact and dialogue.

This comes amidst statements from the head of state in his recent whistle stop tours where he cautioned Malawians of going to the streets insisting that who ever goes to the streets will met him and face the consequences. The civil society has been pressing for the president to respond to their 20 point petition which amongst other issues tackles persistent fuel crisis, forex shortage, CHANCO stalemate, First Lady’s salary from charity works, human rights and governance issues.

However, many people have questioned the philosophy behind such a move raising doubting eye brows that some of the civil society leaders are sell outs and traitors. In response to the allegations Rodgers Newa emphasized that the civil society have not been “bought “as alleged by some people and that they were only respecting the courts but had also opened a window of dialogue. They rather expressed worry and argued the members from both the civil society and government to refrain from hate statements as they ignite anger and also asked the president to stop name calling of civil society leaders advocating for human rights in his rallies as these too have implications.

In closing the nurses & midwifery council of Malawi Executive Director Dorothy Ngoma, called on the people to hold their anger and wait for such a time when it will be possible to hold the nation wide vigils.

But as we went to press, Judge Mclean Kamwambe of the High Court had vacated the injunction saying that a fresh injunction needs to be sought regarding stopping the vigil.