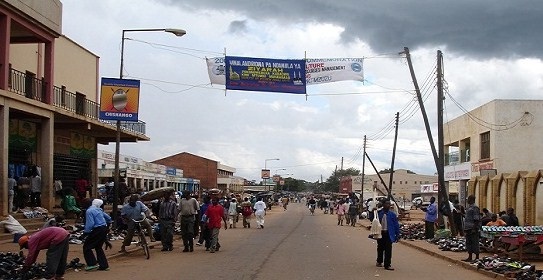 Running battles between police and vendors, teargas, barricaded roads and more were the order of the day in Lilongwe on the final day of an operation to move the vendors out of the city’s streets.

The Lilongwe Vendors Association last week gave all vendors playing their trade outside their designated place and mini-bus touts a seven-day grace period to move out of the streets. The period expired.

But in a mirror image of events of January 5, the vendors once again brought business to a standstill around Malangalanga and Bwalo la Njovu areas when they were involved in running battles with the police.

At some point, the two areas were engulfed in clouds of teargas as the police officers tried to disperse the crowd.

By 10am, all shops around the area were closed, with police officers scattered all over patrolling the area.

The main mini-bus terminal was completely deserted. Mini-buses from Areas 25 and 49 were turning back at Metro which is near Game Store.

Most minibuses taking people out of the ‘volatile’ zone, were using a route through the Kamuzu Central Hospital.

Multitudes could be seen going back by foot from town to surrounding residential areas of Chinsapo, Kawale, Biwi and Area 36, among others.

Elsewhere in Mchesi, the situation was far from different as scores of people were also involved in running battles with the police.

The situation was, however, anticipated. On Thursday, the vendors, through a letter they posted in the streets, vowed not to move out of the streets because it is where they earn their living.

They claimed they would not respect the directive from their leader, Steven Malunga, whom they said is a ruling Democratic Progressive Party (DPP) plant.

This is what they wrote:

Police in Lilongwe had fired tear gas to disperse stone-throwing vendors resisting orders they move off the streets to designated flea markets.

Dandaula says protesting vendors also blocked streets with large rocks and burning tires, and damaged some shops and cars before police got the situation under control. He says 42 people had been arrested by late afternoon and that he expected more arrests.