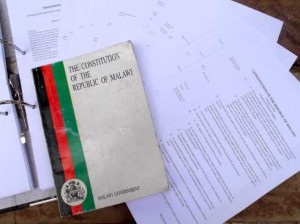 Malawi’s Legal Aid volunteers sift through a pile of files of those on death row. They are doing everything they can to abolish the death penalty in the country and lessen existing prisoners’ sentences.

At least 29 men currently sit on death row in Malawi; however, no one has been executed in the country since 1994. Those sentenced to death are entitled to a mandatory appeal in the Supreme Court.

“Countries like Malawi that have made the transition to democracy increasingly see abolition of the death penalty as a necessary step to signal their commitment to human rights,” said Emile Carreau, an Australian volunteer with Legal Aid.

Francis Kafantayeni was convicted of murdering his two-year-old stepson in 2002. His lawyers claimed he had been acting in a state of temporary insanity because he smoked marijuana. The judge had no choice but to convict Kafantaneni of the murder and sentenced him to hanging, a mandatory sentence for murder.

After a two year long trial, the High Court ruled that a judge could pass down individual sentences to offenders by taking into account the offender’s background, circumstances of the crime and mental health.

“Before lawyers didn’t bother looking into the person’s background and offense. So I’m going through to see what happen at the time of the offense, what happen in their life and since they have been in prison. Trying to get a sentence of life in prison or less,” said Carreau.

However, a judiciary strike in the country has paralyzed the court system making accessing files impossible for the time being.

A shortage of legal aid lawyers also makes it difficult to go through all the files in a timely manner. The State Department reported in 2009 that there were only 15 lawyers and seven paralegals working as public defenders throughout Malawi.

“Legal Aid is ridiculously over burdened at the moment with only a handful of lawyers in Blantyre. Not enough, considering the number of people entitled to Legal Aid,” said Carreau.

Another challenge Legal Aid lawyers are facing in Malawi is the public perception of capital punishment.

“Legal Aid is working to get more lenient sentences for those on death row but the public wants higher sentences. When there (has) been a gruesome murder the general public wants capital punishment to be available for the crime,” said Amanda Walker, a volunteer for Legal Aid.

In 2009 the Center for International Human Rights at Northwestern University School of Law developed a report and interviewed death row prisoners about conditions at the prison. The report stated that currently all death row prisoners are kept in a separate section of Zomba’s Maximum Security Prison. Men share small cells and sleep on the floor, generally they receive one meal per day. When the prison suffers from a food shortage the men don’t receive meals and power outages are frequent.

The report also states, “most lawyers do not visit their clients in prison until shortly before trial, if at all. It is commonplace for lawyers to meet their clients for the first time at trial.”

Although lawyers in Malawi must overcome some major difficulties, they are confident that country is on its way to abolishing the death penalty.

“The abolition of the mandatory death penalty in Kafantayeni and the fact that Malawi has not actually carried out an execution since 1994 has put the country in good stead to abolish the death penalty,” said Carreau.

In recent years some of Malawi’s neighbouring countries have abolished the death penalty, like in South Africa and Mozambique.