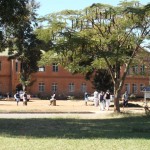 The school, which is one of the oldest in the country, was closed after angry students went on rampage damaging property following the demotion of the school’s deputy headmaster Hudson Zidana to a mere teacher.

The school’s board chairperson Reverend Steven Kamphasa confirmed of the opening, but denied reports that the headmaster Reverend Mathias Hauya had been dismissed.

Hauya is said to have called the police to restore order after the students ran riot, a move that further enraged the students. However, no one was arrested during the fracas.

“It’s true the school will open on Monday and all parents and students are requested to come. As for other issues the Parents Teachers Association (PTA) will look into all those matters. The issue of the headmaster being dismissed is not true and that’s just a rumour,” Kamphasa said.