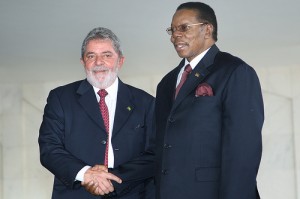 Malawi’s third president since independence from Britain Bingu wa Mutharika who died on Thursday after suffering a cardiac arrest, was born on February 24, 1934 at Kamoto village in Thyolo. He was the son of a primary school headmaster.

Born Brightson Webster Thom, he changed to Mutharika and adopted the first name Bingu during the 1960s when pan-Africanism was sweeping across the continent, according to sources.

Mutharika officially became the President of the Republic of Malawi on May 24, 2004 on a United Democratic Front (UDF) ticket. He was handpicked to be president by former President Bakili Muluzi.

He held a PhD in Development Economics from the Pacific Western University, Los Angeles, USA. He also earned a Master’s degree in Economics and a Bachelor’s Degree in Commerce from the University of Delhi, India.

He worked from 1990 until 1997 as Secretary General of the Common Market for Eastern and Southern Africa (COMESA) which is formerly known as Preferential Trade Area (PTA). As an authority on building regional infrastructure, Mutharika pioneered the establishment of several regional economic organizations such as the Association of African Central Banks (AACB), Conference of African Ministers of Finance, African Federation of Chambers of Commerce and Industry (AFCCI), and Eastern and Southern Africa Business Organization (ESABO).

After serving in the Malawi civil service and also for a period of time in the government of Zambia, Mutharika joined the United Nations in 1978. He rose to the position of Director for Trade and Development Finance and was responsible for 53 African countries. He became the Secretary General of COMESA.

Mutharika was a supporter of the UDF leader, President Bakili Muluzi, but he soon became a critic of Muluzi’s economic policies and left the UDF. He formed the United Party (UP) in 1997 and unsuccessfully ran against Muluzi in the 1999 presidential elections, taking less than 1 percent of the vote.

He dissolved the UP and rejoined the UDF after being offered the deputy governorship at Reserve Bank of Malawi. He was appointed Minister of Economic Planning and Development in 2002, and was then nominated by Muluzi as his successor.

Mutharika won about 36 percent of the vote in the presidential election on May 24, 2004. He earned more votes than John Tembo and Gwanda Chakuamba and took office a few days later. Soon after taking office, Mutharika came into conflict with Muluzi, head of the UDF, over Mutharika’s campaign against corruption.

On February 5, 2005, Mutharika announced his resignation from the UDF, saying that he had no support in the party because of his stand against corruption. There had previously been talk of expelling Mutharika from the party, and there had also been an alleged assassination plot against him by party members in early January 2005. Those accused were later pardoned by Mutharika, but he maintained the existence of the plot. Mutharika subsequently formed his own party, the Democratic Progressive Party (DPP).

In April 2005, Muluzi apologized to the country for choosing Mutharika as his successor and imposing him on the country. Gwanda Chakuamba, who had been made minister of agriculture, was dismissed from the cabinet and subsequently arrested in September 2005 for making a speech predicting that Mutharika would be out of office by Christmas.

In 2006, the Vice-President, Cassim Chilumpha, was arrested; he was accused of plotting Mutharika’s assassination. It was reported in March 2005 that Mutharika was not sleeping in the state mansion because of suspicions that there were evil spirits in the mansion. A presidential aide was quoted as saying that Christian clergy had been asked to exorcise the spirits. This was subsequently denied, and journalists responsible for the story, including a BBC reporter, were arrested. Mutharika said that “I have not met any ghosts yet, I have never in my life been afraid of them”.

Mutharika has upheld the memory of Hastings Banda as a national hero. In May 2006, he was present at the unveiling of a mausoleum for Banda that cost US$620,000. In October 2006, Mutharika stated his intention to seek re-election in 2009 as the DPP candidate.

His wife, Ethel, with whom he had four children, died in May of 2007 after a long battle with cancer which led her to seek treatment in France and South Africa.

During the past two years, Mutharika has been under pressure from both international donors and local non-governmental organisations (NGOs) over his poor handling of governance and economic issues.

In 2010 government sentenced two men to 14 years of hard labour because of their sexual orientation. They were only freed because of international pressure. UN Secretary-General Ban Ki-moon even came to Malawi on their behalf. Government also passed a law that allows it to ban critical newspapers.

Malawi has also not held local government elections for a decade.

In June 2010, amid worsening ties between Malawi and its donors, the IMF said its programme with Malawi was “off-track” as the government had failed to renew a $79.4-million (55.7-million-euro) credit facility meant to cushion the chronic foreign exchange shortages.

IMF has since been pressuring Malawi to devalue the kwacha so that it moves closer to that on the parallel market.

Officially, one US dollar sells at 165 kwacha, but goes for nearly 300 on the black market. This has been the cause of shortages of fuel, imported fertilizers and medicines for two years now.

Since last year, Mutharika has also been facing growing calls to resign for his failure to solve economic problems. The United Kingdom has cut direct aid to Malawi after he expels its envoy, Fergusson Cochraine-Dyet.

Mutharika has been arguing that devaluation would trigger inflation and hurt the poor in a nation where 39 percent of the population live on less than a dollar a day.