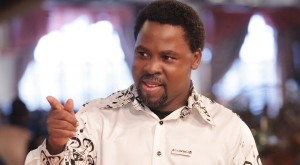 In a widely circulated write-up on the net, titled ‘Maybe T.B. Joshua had medical records of Mutharika’’, broad references were made to allegations made by the Zanu – PF legislator for Tsholotaho North, Professor Jonathan Moyo, to the effect that T.B. Joshua was part of the conspiracy in the death of president Mutharika of Malawi. Moyo was alleged to have clearly stated that Mutharika was killed by political enemies ‘who used T.B. Joshua’s pronouncement to divert attention from them’’ and that the late president “had died as a result of intelligence operation’’.

In his words: “T.B. Joshua’s involvement in this tragedy smarks more of a plot than a prophecy. One thing for sure is that there is no prophecy here but just a prediction if one is to give him a benefit of doubts’’.

He had continued: ‘This leaves open the questions as to what happened because to natural people, there appears to be more to the saga than meets the eye. In some circles there is even a spirited speculation in well informed circles that T.B. Joshua had privileged intelligence information about a death plot against president Mutharika and the plotters used him as their microphone to divert attention from them and let the death appear like it was an act of God when it was an intelligence operation.’’

Prof. Moyo had harped on like a distorted hearted motor spare parts. ‘The kind of alleged exact prophecy on when it was going to happen shows that this was being said by someone with medical information and not from God. It’s possible to medically induce a cardiac arrest, no wonder why his death was first leaked by his doctors. If you start seeing people making such prophecies, it shows that the world is coming to an end as said in 2 Timothy 3, verses 1-5 about false prophets. I have no doubt in mind that T.B. Joshua is a false prophet.’’

These are very grave issues because of many reasons. First, there is an allegation that the Nigerian-born pastor, Prophet T.B. Joshua, not only knew the medical history of the late Malawian President, he also knew his political enemies who had wanted to originally eliminate the man, obviously for political reasons. Secondly, Moyo wants the world to realize the fact that Joshua — a man who must be prosecuted by all means— knows how to satanically manipulate people’s misfortunes to score spiritual goals, and that he is an evil incarnate, and not a man of God.

But it is a terrible misrepresentation of facts for a university don and a well placed politician who has since known how to run away from facts in order to attract vain political applause. It remains to be seen how a cabinet member in Zimbabwe knew so much of the political situation in Malawi, that he could even know when exactly the enemies of the late man struck, in connivance with Joshua, to despatch him to the world beyond. In other words, Joshua, rather than being a prophet of God, is a murderer, a political antichrist, and a conspirator who has been using the Bible to cover face.

We think Prof. Moyo should be invited by the security agencies in Malawi to acknowledge his submission, and compel him to name the political enemies, known to him, who had worked in tandem with Joshua to eliminate the late president.

This is because there is the impression that Moyo knows more than even the Malawians the causes of the president’s death. These ‘political enemies’ must have been so strong as to link up with the spiritual guardian of the man in power, T.B. Joshua, to work against the life of the dead president. Obviously, Joshua was called a killer, when he, as a prophet of God, knows that ‘Thou shalt not kill’ is one of the most pronounced commandments of God!

Moyo has a duty to his conscience, country and Africa to prove it that Joshua was a conspirator whose prediction (rather than prophecy) galvanized the enemies of the former president to move against his life. We keep wondering what the likes of President Chiluba (of Zambia) and Gaddaffi (of Libya) would be feeling in their graves because T.B. Joshua equally spoke on their own incidents even before their demise. What of the Micheal Jacksons, and the numerous other presidents and their families, and many plane crashes which came to reality? What of the recent plane crash incident in Nigeria, which led to the death of some officers of the Armed forces?

Moyo is a Zimbabwean, and it is quite clear that the man is afraid of Joshua, who had prophesied that a president in Africa would soon die, since January, 2012. Moyo and some others who had to write on the internet also felt the Zimbabwean leader was the person being referred to, and they were so displeased that very terrible titles were inhumanly lavished on Joshua. And such people have not rested ever since, despite the fact that it was not Mugabe that was concerned. Such people even knew the ‘political enemies’ of all African heads of state that they were conversant with the ‘false prophets’ working on their behalf. Africa is a funny continent filled with self – opinionated, horrible – souled, cannibal – minded individuals who want always to run from facts and launch their excrementitious obscurities on all others.

If the late president was so close to Prophet Joshua, to the extent of asking for special prayers, during the moment of his ill-health, how could he be a party to the cliché of political eliminators of the man, who was obviously loved by many? Who were the ‘enemies’ yet to be named by the twisted minded Moyo and his clichés? How exactly did Joshua come to be involved in the so-called ‘tragedy’ which rather “smacks more of a plot than a prophecy”? Which attitude of Joshua actually suggested that his pronouncement “diverted attention from the enemies”? Was Joshua authorizing political fallouts – perhaps as a cabinet minister – from Malawi, perhaps after the death of the old man? Moyo crudity and close-mindedness, despite his professorial appellation, is rather disturbing.

Where could Joshua have gotten the so-called “privileged intelligence information about a death plot against President Mutharika” and who exactly were the “plotters”? Were they Zimbabweans, Malawians or Nigerians? Where were meetings held, and resolutions made? Who said what? How were the plans uncovered? What exactly was the role of T.B. Joshua in the agreement to eliminate the President? Since when has “exact alleged prophecy” of any type become a crime in political circles? And when exactly is the knowledge of medical information governed by an experience “not from God”?

Moyo foolishly spoke of the world “coming to an end” perhaps through some nebulous intelligence report? Could the Zimbabwean plotters be responsible for planning the end of the world? Could Moyo himself be seen as a “false prophet” by claiming knowledge of the coming of the end of the world? Moyo is one of those in African leadership who should experience psychiatric test because he is blasphemous of the Holy Spirit by claiming to know all that is in the mind of God. Secondly, his claims to intellectualism are suspect because a man who does not know that he does not know is a champion amongst fools.

Moyo and his “conspiracy theories” have revealed that we have a long way to go in Africa to be relevant to the modern world. What has prophecy got to do with good leadership? Any good leader will not be afraid of prophecies and the old Malawian President was not a shallow-minded and thoughtless man to be friendly with a world-acknowledged man of God! Malawians are ever-proud of their former President, and even more so, of the present leadership in that country. They have not been talking of “medically-induced cardiac arrest” and the fact that his doctors “leaked” the cause of death. Perhaps, only “gay” prophets, false political machinators, violent and demented opinion-moulders’ have a right to manipulate facts to sell their odious, smelly apparitions!

Must political leaders necessarily be killed by “political enemies” or “prophets”? Could the owner of life not stop life from functioning? He who keeps the clock going can arrest the fingers of time, for anybody – as said recently by Prophet Joshua, as he was honored by Pastor C.S. Upthegroove, Pastor of the A.A. Allen Church in America, as one of the twelve end-time prophets in the world! A man that has been so acknowledged the world over has no business working through dubious, namelessly ugly prophetic statements. But Moyo is a politician; in Africa we know their type. Their revelations, projections, readings and idealizations are often propelled by selfish and greedy motives. It is difficult to kiss an African politician without the fear of being poisoned. They like to rubbish everything in their favour – their politics is rotten, and their ideological inclinations are ever suspect. If Moyo knows the “political enemies” who killed the President of Malawi, what he should do, so urgently, is reveal them for the world to know, rather than using a hollow-skulled head butt to hit at a universally acknowledged man of God to enrich his political emptiness!

No wonder, Malawians have kept condemning Moyo, and have asked him to apologize to them for talking rubbish. The Zanu PF party has understandably, “dissociated itself from his remarks”, and that “the politburo member was expressing his personal views and that what he said was not the position of the party”. Rugare Crumbo, the Zanu PF spokesperson was alleged to have condemned Moyo; “Ask Moyo, he’s the one who said it. He was speaking on his own behalf”. Such recklessness, such tomfoolery!