Justice Minister Sebastian Zulu says Malawian Judge Lovemore Chikopa must go back home because he is doing nothing but spending Zambian taxpayers money.

But Zulu says it is only President Sata who can ask Judge Chikopa togo back to Malawi since it was the President who appointed both the Judge and the tribunal. 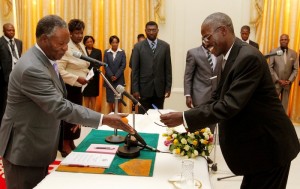 “If the Supreme Court takes a longer time to hear the matter, I agree that the judge must first go back to Malawi until the matter is disposed of in court,” Mr Zulu said.

It is not known whether judge Chikopa will ever preside over the tribunal since its legality has been challenged and halted in court.

Some sections of society have called for Judge Chikopa to return home pending the disposal of the cases in which the two judges are disputing the decision by President Sata to set up a tribunal to investigate their alleged misconduct.

Zulu has has said he will soon tell Zambians the way forward regarding the continued stay of Judge Lovemore Chikopa following halting of the tribunal proceedings as a result of the court case between the state and two of the three judges.

Zulu said he was not in a position to state whether Judge Chikopa should continue to be in Zambia or not, until the Supreme Court sets the date of hearing in which the State has appealed against the judgment by the High Court to suspend the tribunal to probe the suspended judges.

Two of the three suspended judges Nigel Mutuna and Charles Kajimanga had obtained a stay to prevent the tribunal from sitting to hear their alleged impropriety pending the full determination of the matter by the High Court.

The two Judges took the Attorney General to court asking it to quash President Michael Sata’s decision to constitute a tribunal to conduct investigations of their alleged misbehaviour or incompetence.

High Court Judge Fulgency Chisanga, last week granted the duo leave to apply for judicial review which would operate as a stay of Mr Sata’s decision to appoint a tribunal and suspend the judges and any adverse measures against the applicants.

The third Judge, Supreme Court Justice Phillip Musonda, who was suspended together with the two Judges, is however, not party to the legal proceedings.