Traditional So-ran bushi, a fishing song which is taught in schools in Japan, was the perfect introduction to Japanese culture when volunteers displayed the folk dance at Trade Fair Grounds on Sunday. 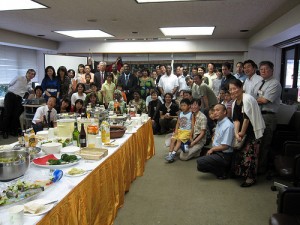 The dance was emotional as the volunteers recounted the 2011 Tsunami that claimed thousands of lives, 754 cultural properties and left thousands of people devastated.

Apart from the dances, the volunteers also demonstrated how to cook, HIV and Aids prevention demonstration and science show demonstrated by Japanese teachers who are working in Malawi.

Hiroshi Izumisawa, a Volunteer Youth Officer in Mulanje, said the Japanese volunteers organised the cultural festival to connect with Malawians and give them a chance to appreciate Japanese culture.

“We wanted to introduce the activities of Jica in Malawi, introduce Japanese culture and acknowledge the support Malawians and the world rendered to us when an earthquake and tsunami devastated our country.

“It was tragic and a lot of countries supported us through messages that brought hope to the victims of the earthquake,” said Izumisawa.

The volunteers capped their performances with a song titled ‘Uwewo Muite Arukou’ which basically means ‘Let’s Walk with Our Heads High.’ The song was performed in Japanese, English and Chichewa but it was the Chichewa version that attracted a round of applause from the audience.

Displaying how quickly the volunteers acquire local languages, the excitement was not exaggerated as they took turns to accompany the song with some dance.

Izumisawa said the proper way of appreciating Malawi’s support was through song and dance.

“In our culture, we usually say arigatou (thank you) to acknowledge any kind of support. The festival gave us the opportunity to thank Malawians and the world that despite the distance, their support reached the people of Japan,” he said.

Malawians on social media are demanding an apology from...
FaceofMalawiNEWS