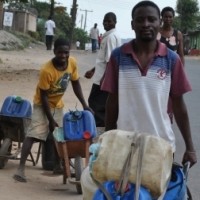 The problem of water shortage reared its ugly head in some parts of Blantyre this past weekend sending people on to the streets in search for water.

The shortage was apparently acute in Ndirande and Bangwe townships, two of the largest townships in the city, where scores of women were spotted on Sunday clamouring in few available functioning water points especially boreholes.

A spot check in Bangwe found some residents walking to as far as central Limbe, a distance of about 4 kilometres, in search for water.

In the morning, there were a lot of people washing in polluted streams in the township.

“It’s really terrible. I am walking all this distance just for one pail. It means that for me to get enough for my family, I will spend almost the whole day today and that’s not the only task that I have,” said Loyce Jere, a Bangwe-based mother of four children, during her first trip to Limbe.

Victoria, a Zingwangwa resident said, “I have been without water in my house since Thursday night. Blantyre Water Board is failing in its job.

“We have been told all these years that they are working to improve service delivery. But what we are seeing actually is the worsening of the situation. This is really bad.”

But Blantyre Water Board (BWB) attributed the problem to power failure.

BWB spokesperson, Innocent Mbvundula, said the water utility was aware of the problem but blamed it on power supply.

He said the supply problem started with a fault in the lines of the Electricity Supply Corporation of Malawi (Escom) which supply power to the board’s main water pumping station at the Walkers Ferry.

He said the fault resulted in the board pumping only half the normal amount.

“On Thursday night power lines feeding the Walkers Ferry had faults. But this was rectified and by Saturday we started to pump normally.

“But just as things began to normalise on Sunday, we experienced a blackout which affected all our pumping stations,” Mbvundula said.

He said however that normal pumping of water resumed on Sunday and residents should expect normal water supplies by today.

Mbvundula said though that some areas in high altitude could continue receiving little or no water because of pressure.

To ensure that most areas are covered while the system is picking up, BWB engineers are working and rationing water in areas where supplies have resumed, he said.