Malawian Journalists shined at the 2015 SADC Media Awards that were presented on Monday at the opening of the 35th SADC Summit heads of state meeting in Botswana.

The two received US$2000 (over K1 million) each as prize money, a certificate signed by SADC Chairperson, Robert Mugabe of Zimbabwe. 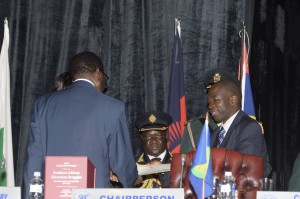 Speaking on the award, President Professor Arthur Peter Mutharika has hailed the two Journalists for putting the country on the world map.

“This is a proud moment for Malawi bearing in mind that out of the 15 Countries in the SADC Region and only four awards on offer, Malawi has managed to get two, representing 50 percent of the total awards, a feat that has never been achieved before by Malawi in the history of the SADC media awards. The remaining two awards have been shared between Botswana and South Africa.

“It is the expectation of the State President that these awards will encourage the winners to achieve more success in their future endearvours and will also inspire all of us to work harder in all our efforts to put Malawi on the international map for the good reasons as the two sons of the soil have done,” reads in part the statement signed by the then Minister of Information Kondwani Nankhumwa.

The SADC Media Awards take place each year in the four categories of print , radio, photojournalism and television. The competition is open to all SADC national journalists.

Previous articleIconic Ladysmith Black Mambazo to perform in Malawi, August 29
Next articleIF YOU WANT TO GIVE BIRTH TO A MALE CHILD, THIS IS WHAT YOU NEED TO DO