Thomas Beatie says he is just like any other normal father. But he is about as far as you could be from typical. He claims to have given birth to the child. Although born a woman, Beatie had his breasts removed and lives outwardly as a man after changing his gender to male.

The 34-year-old says he retained his female sex organs because he intended to have children one day. He conceived with sperm from a donor and was inseminated at home by his 45-year-old wife Nancy, using a do-it-yourself kit.

Despite opposition from family, friends and the medical profession he continued with the controversial pregnancy and says that on June 29 he delivered Susan Juliette.

Yesterday Beatie, from Bend, in Oregon, spoke for the first time about the 40-hour labour, describing it as the ‘experience of a lifetime’.
He said: ‘It was simply amazing and beautiful and is a moment I will cherish for the rest of my life. 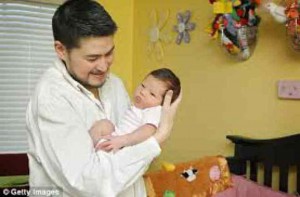 ‘Everyone thought I was going to have a caesarean but I always knew I wanted a natural birth and I had one.

‘As she was being born the midwife said she had this mass of dark hair like me.

‘I could hear her words but I needed to see her for myself. And then she came out and my eyes just filled with tears. She was so beautiful and perfect in every way. I was overwhelmed with love and wonder and I couldn’t keep my eyes off her. I still can’t today.’

He also claimed that his daughter is fed naturally by his wife who has begun to produce milk after being stimulated by the suckling baby.

He said: ‘Most people assumed that our baby would not be breast-fed but we are proud to announce that she is.

‘Nancy breast-feeds her every two to three hours. I do everything but breast-feed her.’

Beatie, who was born in Hawaii as Tracy Lagondino, had a partial sex change operation ten years ago and married soon after.

He told the News of the World: ‘We see ourselves as a traditional family – husband, wife and child. Nancy and I have strong family values and will raise Susan with integrity, compassion and respect for all people.

‘Like any proud dad I look forward to being a huge part of my daughter’s life. I can’t wait to watch her and Nancy bake cookies and cupcakes together.’