Russia’s upper house of parliament has voted unanimously to allow President Vladimir Putin to send troops to Syria to fight the Islamic State.

The Federation Council discussed Mr Putin’s request for the authorisation behind the closed-doors meeting on Wednesday.

Sergei Ivanov, chief of Mr Putin’s administration, said the measure was necessary ‘not in order to achieve some foreign policy goals’ but ‘in order to defend Russia’s national interests’.

The move came as France’s first air strike against ISIS in Syria killed at least 30 jihadists, including 12 child soldiers known as ‘Cubs of the Caliphate’. 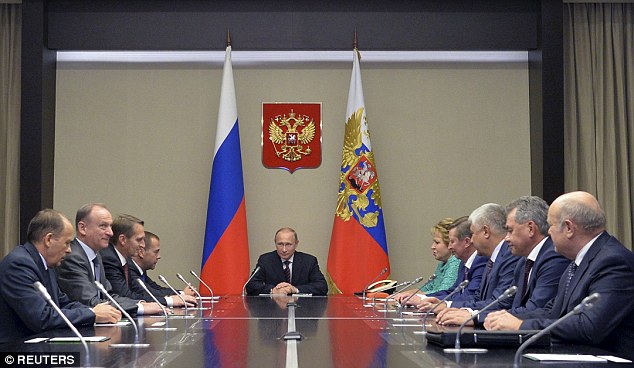 ‘Defending Russia’s national interests’: Vladimir Putin (centre) chairs a meeting with members of the Security Council at the Novo-Ogaryovo state residence outside Moscow. Russia’s upper house of parliament has voted unanimously to allow the President to send troops to Syria to fight the Islamic State

Putin has to request parliamentary approval for any use of Russian troops abroad, according to the constitution.

The last time he did so was before Russia annexed Ukraine’s Crimean Peninsula in March 2014.

Putin’s request came after his bilateral meeting with US President Barack Obama on the sidelines of the United Nations General Assembly meeting in New York, where the two men discussed Russia’s recent military build-up in Syria.

The Kremlin reported that Mr Putin hosted a meeting of the Russian security council at his residence outside Moscow on Tuesday night, saying that they were discussing terrorism and extremism.

Ivanov insisted that Moscow is not going to send ground troops to Syria but will only use its air force ‘in order to support the government Syrian forces in their fight against the Islamic State’ group. 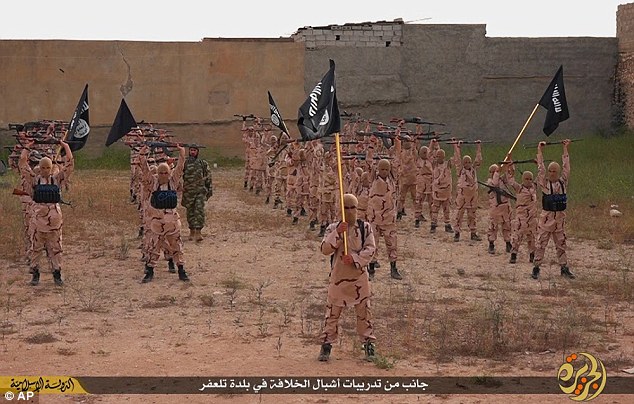 France’s first air strike against ISIS in Syria killed at least 30 jihadists, including 12 child soldiers known as ‘Cubs of the Caliphate’ likes the ones pictured above in an ISIS propaganda video

Ivanov said thousands of Russians had gone off to fight in Syria so it would be wise for Moscow to ‘take pre-emptive steps and do it on the distant frontiers instead of facing the issue here and later on’.

He said the motion came after Moscow received a request from Mr Assad asking for help.

He said the biggest difference between Russia and other countries carrying out air strikes in Syria – such as the US – is that ‘they do not comply with the international law, but we do’.

Moscow has always been a top Assad ally. The war in Syria, which began in 2011, has left at least 250,000 dead and forced millions to flee the country. It is also the driving force behind the record-breaking number of asylum-seekers fleeing to Europe this year.

Parliament cut its live web broadcast on Wednesday while it was considering Mr Putin’s request.

The Russian opposition was rattled by the Kremlin’s request and the way the vote was held.

‘The fact that the Federation Council considered sending our troops abroad behind closed doors looks unconstitutional,’ opposition leader Alexei Navalny said on Twitter. ‘Or is it just their own grandsons who are going off (to fight)?’

Meanwhile, at least 30 jihadists, including 12 child soldiers, were killed in France’s first air strike against ISIS in Syria, a monitoring group said. 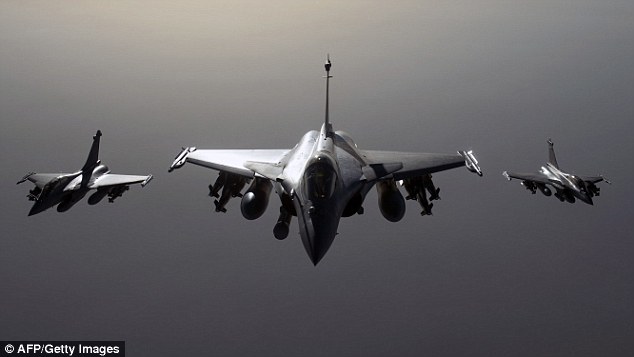 ‘The French air strike (on Sunday) on an ISIS training camp in eastern Syria killed at least 30 ISIS fighters including 12 from the ‘Cubs of the Caliphate’,’ said Rami Abdel Rahman of the Syrian Observatory for Human Rights.

ISIS calls its child soldiers ‘Cubs of the Caliphate’.

Abdel Rahman said foreign ISIS fighters were also among the dead and that the strike had wounded around 20 people.

The raid took place in Syria’s eastern province of Deir Ezzor, near the Albu Kamal border crossing used by ISIS to link the Syrian and Iraqi parts of its so-called ‘caliphate’.

President Francois Hollande said on Sunday that six French warplanes hit an ISIS training camp near Deir Ezzor city and that more strikes could follow in the coming weeks.

‘We struck militarily an extremely sensitive site for (ISIS),’ said French Defence Minister Jean-Yves Le Drian, describing it as a ‘strategic hub’ for militants travelling between Iraq and Syria.

It was France’s first air strike in Syria as part of the US-led coalition fighting the extremist group there and in Iraq.

France was already bombing ISIS targets in Iraq and had carried out 215 of the nearly 4,500 air strikes there.

Previous articleWOMEN in Kenya Hold Demostrations Because of Lack of Men To MARRY Them or Make Them Pregnant
Next articleMALAWIAN PROPHET TREVOR KAUTSIRE SPILLS THE BEANS CONCERNING MODERN DAY PROPHETS: “WE USE WITCHCRAFT, SATANISM & MAGIC”