Joel Schumacher, the famed director of the Batman movie franchise and ‘Lost boys’ has died aged 80 after a long battle with cancer.

Schumacher died on Monday in New York the same city he was born and bred. 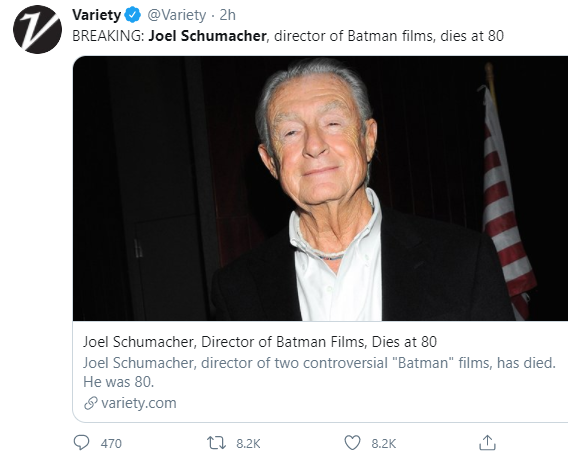 Schumacher started out in Hollywood as a costume designer, earning credits on 1972’s “Play It as It Lays,” Herbert Ross’ “The Last of Sheila” (1973),  Paul Mazursky’s “Blume in Love (1973), Woody Allen’s “Sleeper” (1973) and “Interiors” (1978) and 1975 Neil Simon adaptation “The Prisoner of Second Avenue.” He was also credited as the production designer on the 1974 TV horror film “Killer Bees.” before he went into writing screen plays then directing.

His last movie under the franchise was 1997’s ”Batman and Robin” with George Clooney as Batman and Arnold Schwarzenegger as villain Mr. Freeze.

Although he studied at Parsons the New School for Design and the Fashion Institute of Technology in New York and worked in the fashion industry, he is more known for his works in the movie industry. He will always be remembered for the movies he directed like the Batman franchise, The Phantom of the Opera, Lost Boys, St. Elmo’s Fire and some episodes in House of Cards.

May his soul rest in peace. Amen.

A mob of married woman took to the street...

South Africa’s struggle with racism is once again in...

THE Seventh Day Adventist (SDA) Church has been hit...
FaceofMalawiNEWS