For the past weeks Malawians have been complaining that it is worrisome that the country’s network providers and mobile operators are charging a lot of money on internet bundles while neighboring countries are paying less on the same.

This has prompted Malawians on social media to protest against high charges on internet data bundles trough the #ReduceDataCost campaign.

Musicians have joined the campaign since they are they are opting for online shows following the ban of huge gatherings due to covid-19 pandemic.

A well-known gospel musician Thocco Katimba wrote on his Facebook page agreeing with the rest of Malawians that Data charges must indeed fall. 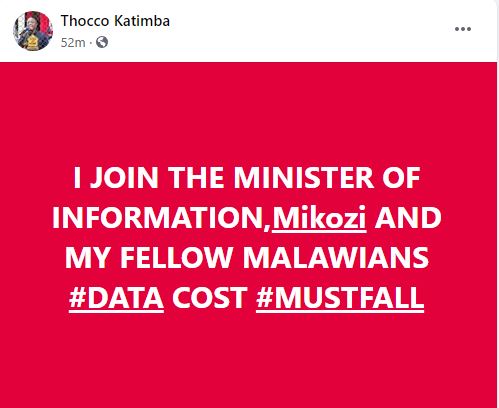 Responding to the cries of data charges, Minister of Information Gospel Kazako directed the Malawi Communications Regulatory Authority (MARA) to reduce data charges when he visited the offices during a familiarization tour.

According to Kazako it is unfair of what the network providers are doing to Malawians.

“It’s unfair. Yes, imagine in neighboring Tanzania people buy 1GB data for internet at 4 US cents while us in Malawi we buy the same 1GB internet data at 80 US cents.”

Kazako further promised Malawians that this will come to an end very soon.