Minister of Lands, Kezzie Msukwa and Minister of Homeland Security, Richard Chimwendo Banda, said this when they visited the premises on Friday morning.

Msukwa said it was unreasonable for government land to be bartered.

Meanwhile, Chimwendo Banda says the Chakwera led administration will use the land to build new houses for the law enforcers. 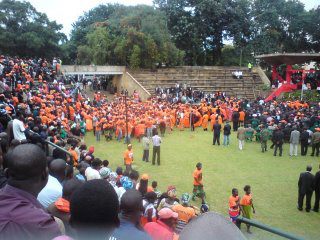