A lady with the Instagram handle “Tundeednut-sister”, has sent a video to Regina Daniels, which allegedly captured her husband, Ned Nwoko ‘loving-up’ with veteran actress, Chika Ike.

It would be recalled that Chika had been the billionaire’s side piece long before he married Regina Daniels. It had seemed that the relationship with Ned ended, when he moved on to find greener pastures in other actresses, and then marrying Regina as his sixth wife.

However, quite recently, their have been rumours speculating that the Veteran actress, Chika Ike has rekindled her relationship with Ned Nwoko, as his side piece.

There are also rumours that she might be pregnant with his child and looking to be his seventh wife. Although she quickly debunked the rumours of marriage, she didn’t quite deny that she was seeing Regina’s husband.

Well a lady on social media claims to have evidence of Ned Nwoko and Chika’s secret affairs.

According to the whistle-blower, the ‘secret’ meeting of Ned Nwoko and Chika Ike happened at Maitama.

The lady said she filmed them and sent the video to Regina Daniels. She asked Regina Daniels to respond to her message right away otherwise she will have no option than to go to her social media platforms to spill the beans.

“Girl I just send a video on dm. I saw Ned Nwoko and Chika Ike @ Maitama and I recorded it. I will upload it on my page in two hours ur you don’t get back to me.” 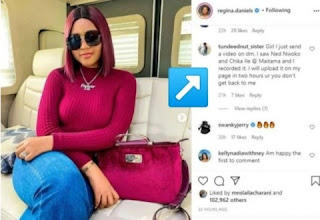 After long hours of being questioned by the Anti-Corruption...

The Ant-Corruption Bureau (ACB) has arrested the Vice President...