Speaking during the first face to face State House Weekly Brief after a few months of going virtual, Banda said the President has several times reiterated that he will not shield anyone found guilty of the malpractice.

In his remarks during the briefing, Director of Communication at State House, Sean Kampondeni, said, over the past week, President Chakwera had several meetings with a number of Government, community and religious leaders in Lilongwe. Among them was the Minister of Youth and Sports who briefed him on the progress being made on the Indoor Sports Complex and other related development projects in the capital city.

He further said, the Tonse Administration is committed to developing talent and sports in the country.

And on his engagements in the Northern Region, Kampondeni, who is also Executive Assistant to the President, said Dr Chakwera held brief whistle-stop meetings as he was travelling up North in keeping with COVID-19 preventive measures.

While in the north, Dr Chakwera, also held separate meetings with some members of Parliament from the North, religious and traditional leaders and members of the Civil Society Organizations from the region.

On the forthcoming budget session, scheduled to be officially opened on Wednesday, May 12, Kampondeni said the President also met the Leader of the House in Parliament, who is also Minister of Homeland Security.

During question time which formed part of the fortnightly State House briefs, Presidential Press Secretary, Brian Banda, responded to several questions from members of the media which included the recent comment President Chakwera made at Kasungu regarding the firing of Ken Kandodo, former Minister of Labour in his Administration.

Banda indicated that Malawians will be informed about the course of action the President will take regarding this and other matters of public interest in the country.

On whether Malawi will be sending troops to Mozambique to help the country in the fight against the insurgency or not, the Press Secretary said, when formally requested, Malawi will respond to the request accordingly.

At the time of writing the report, President Chakwera was laying a wreath at the grave of one of the country’s gallant freedom fighters, late Chakufwa Chihana and proceeded to preside over the official hand over of Secondary Education Expansion SEED Project at Mchengautuba Community Day Secondary School in Mzuzu. 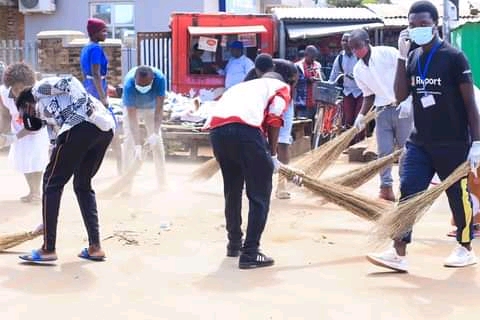 CISE Malawi in a clean-up exercise in Mchinji