Business tycoon Thomson Mpinganjira has told the Blantyre High Court that he has made money donations to several political parties as an individual.

The FDH Bank owner adds that the Peoples Party of former President Joyce Banda got K40 million between 10 May 2019 and March 2020.

The mogul further disclosed that he has given K99 million to UTM and an additional K350 million to fund the purchase of campaign vehicles for the party between the period of 31 August 2019 and 18 June 2020.

He indicates that the transactions he made with DPP/Arthur Peter Mutharika, are totaling to K950 million.

Mpinganjira who was arrested in January last year is being accused of offering money to 5 constitutional court judges who presided over elections case so that they rule in favor of the Democratic Progressive Party-DPP.

Last month, the judge presiding over the case Judge Dorothy DeGabriel found Mpinganjira with a case to answer. 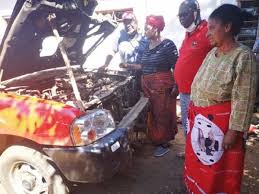 Woman found dead in her house in Chilomoni, husband arrested