China’s Broad Group recently showcased its innovative Living Building, a new type of modular building system, by erecting a 10-storey apartment building in Changsha City in only 28 hours and 45 minutes.

The Living Building concept developed by Broad Group sounds like it could truly revolutionize the construction industry, and the Chinese company’s recent feat of erecting a 10-floor building in just over a day was meant to emphasize just how disruptive its new system can be. Technically, the building was just assembled on a site in Changsha, by three cranes and a large workforce, as all the components were built in a local Broad Group factory and transported by truck. But that’s one of the features of the Living Building system, it consists of pre-made container-size modules that only need to be bolted together at the “build” site and have their electricity

The true innovation behind Broad Group’s newest product is the concept of building houses like cars. Everything is produced and assembled at a state-of-the-art factory in Changsha, and then transported to the desired location for assembly. Built out of the Chinese company’s proprietary Bcore steel slabs, the modular components can be folded into a standard 40ft-high container that can easily be transported by land and sea, just like regular containers.

Once the containers arrive at the desired location, all that is required is an “extremely simple” installation process that involves tightening the modules together to form a building, and connecting the electricity and plumbing. It sounds too simple to be true, which is exactly why Broad Group did the recent demonstration. 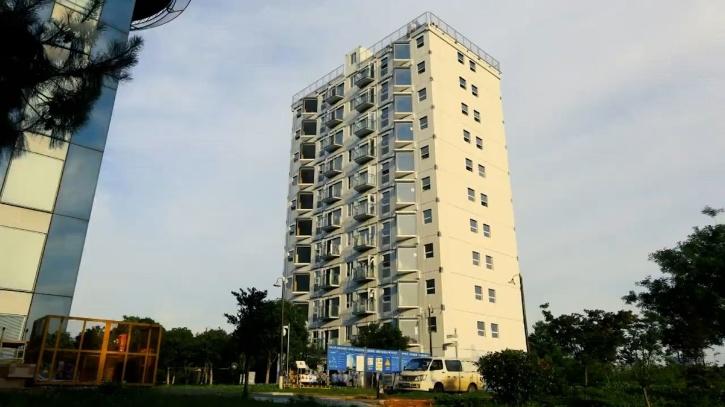 Watching the video of the 10-storey Living Building coming to life and becoming inhabitable in just over a day is quite impressive, but the speed at which it can be assembled is just one of the many qualities Broad Group boasts about in its presentation.

According to the Chinese company, the stainless steel structure is 10 times lighter and 100 times stronger than conventional buildings, and is resistant to “mega earthquakes and typhoons”. It’s also considerably cheaper to make than traditional structures and carbon steel buildings, thanks in large part to the streamlined production process. 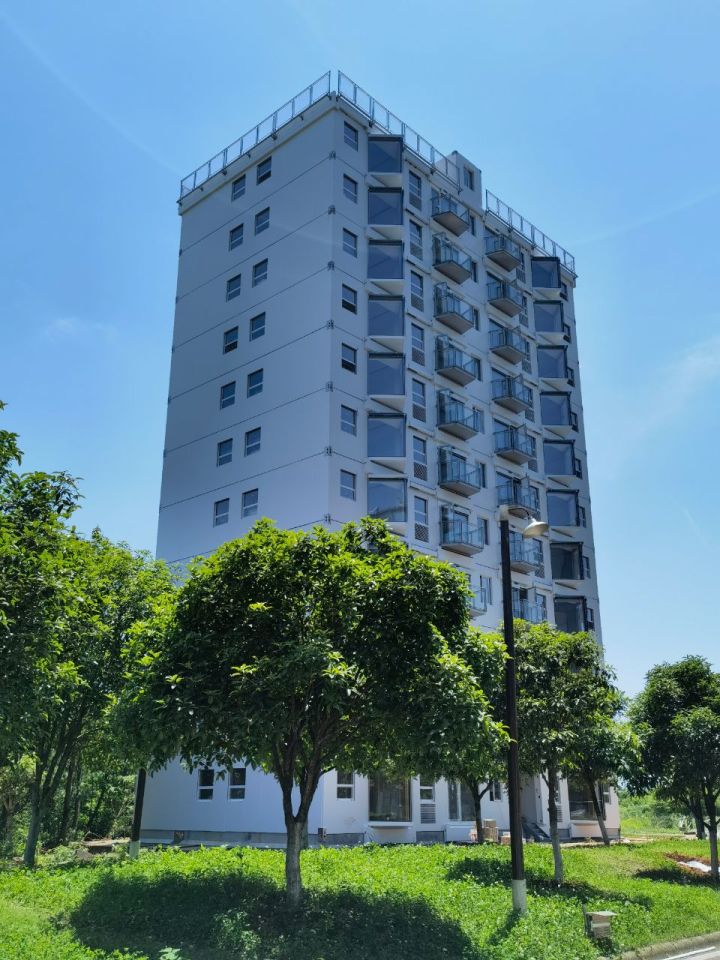 Thanks to the 22-cm-thick insulation, as well as 3 or 4-pane glass windows, and intelligent heat recovery system, the energy cost of the Living Building is reportedly 1/5 to 1/10 that of traditional buildings.

Broad Group claims that its new system is called Living Building because of its versatility. It can be used for luxury and public residential structures, as well as skyscrapers up to 200-storeys-high. Thanks to the modular design, the building can be disassembled and moved to new locations easily, and the position and number of walls, doors, windows and balconies can be changed after completion.

Finally, Broad Group claims that the 100% stainless steel structure of its Living Building is over 30 times more corrosion-resistant than carbon steel and has over 1,000 years of service life.

We’ll have to wait and see if the Living Building concept takes off, but there’s no denying that the idea of building a 10-storey building in just over a day is very intriguing. It’s not as cool as the tiny house that can be installed in just 3 hours, but still…

Previous articleDad ‘killed 13-year-old son after the boy found pics of him in women’s underwear eating poo’
Next articleJoe Biden to allow at least 10,000 deported asylum seekers whose claims were dismissed under Trump to return to US