Speaking during the handover ceremony, the association’s President Henry Mkumbira Phiri, said he was very excited to represent the Malawian Community in Ireland as he personally handed over the keys to the beneficiary Gogo Wetu.

“I am very excited to travel all the way from Ireland and handover the keys of this modern house to Gogo Wetu who for long time has been staying in a very small house together with her grandchildren.

“To me, I feel good that Gogo Wetu will now be staying in a good house,” he said.

Phiri disclosed that the Gogo Wetu’s house construction project costed the association K2, 950,000 including a separate kitchen, toilet and bathroom.

He thanked all partners who financially contributed towards the implementation of the project.

“Let me thank everyone one who financially contributed towards the implementation of this important project including you Malawians living in South Africa and United Kingdom, you done a great job and may the good God bless you for this,” he thanked

Phiri further expressed his gratitude to the house construction project’s Manager in Malawi Priscilla Thawe who devoted her time to see the project a success.

The AMAI President also thanked his Executive Committee for their endless support throughout the project.

In her own words, the house beneficiary Gogo Wetu thanked the Association for the house.

“I am very thankful to the Association and all who took part towards the construction of this house.

“This house will now ease some of the challenges I had such as lack of good place to sleep and others,” said Wetu.

Mangochi district Social Welfare representative, Daud Saliwa said Gogo Wetu was identified because she was living in a small shelter with her 15 grandchildren.

“We were asked to find the one elderly woman in the district so that the association can construct a house for her.

“After our research, we found Gogo Wetu who was living in a very small house together with her 15 grandchildren,” said Saliwa. 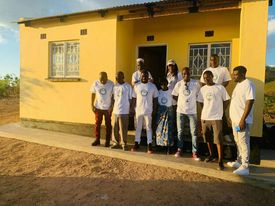 The group village headman for the area, Kasila also thanked the Association for the good gesture and requested if they can do the same for others in his village including him.

AMAI is an association formed by Malawians in Ireland.

The Association has its long term vision to build one good house for the elderly in Malawi.

After Gogo Wetu’s house, the Association is expected to embark on another house construction project next year and the beneficiary is yet to be identified.