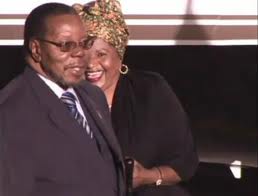 Judging from media statements, it is becoming obvious that Bingu and his wife Callista do not know the role of Civil Society Organizations. Both are ignorant and this free tutorial is to help them learn about them. Not long ago it was reported that Bingu had directed that all NGOs should be reporting to him as President of Malawi. And on Monday morning the 3rd of August, Callista was reported to have castigated NGOs to go to hell. This is a matter of great concern when such statements come from respectable citizens. Why is Bingu and his wife paranoid with NGOs? They are afraid. To them the majority in parliament was guarantee to plunder public resources without any hindrance. This is why Bingu has built such an expensive house at Ndata Farmwithin a short time without fearing repercussions. And that is why he wants his stupid brother Peter to succeed him as President of Malawi. The aim is for him to cover up..
To help the two citizens sleep to night, it is important to allay their fears by advising them that Civil Society Organizations exist throughout the world. They prosper in developed countries and are also central part of the social fabric in developing countries. Strangely, they thrive in free democracies and also play an important role in less democratic regimes. Civil Society Organizations exist everywhere because of a human quality that brings people together to provide services for themselves and others and to campaign against abuse of fellow human beings, animals and the environment. Citizens in every country want health, welfare, education, freedom, and information to improve their world in which they live in. Due to corruption in government, they expect the Civil Society Organizations to offer some of these services.
Civil Society Organizations concentrate primarily on the delivery of social justice. The ethos that all in Civil Society Organizations share is a cause namely, human dignity, social justice or freedom. They are managed by people who believe change is needed and have commitment to make a difference regardless of threats of death or arrests by government. The Civil Society Organizations world-wide are becoming stronger than ever before so that the best way is to cooperate with them. It is unethical for Bingu to assume control over these organizations. Similarly, it is foolhardy for Callista to castigate them to go to hell. The best piece of advice is for Callista to go to hell for Bingu to follow her.